Home General Articles Falcified Genocide National Library Week in the USA and the April 20 Presentation as... 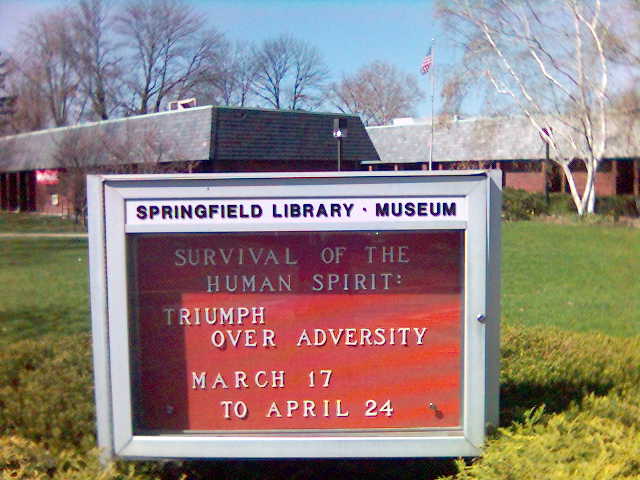 April 13 – 19 is the “National Library Week” in the USA which was also celebrated in Turkey in early April. There were only a few articles about the event in Turkey, such as the assessment by Dogan Hizlan in Hurriyet, and, as far as the public is concerned, very few celebrations were held, if any.

Taking advantage of a business trip that took me first to Boston (where the Turkish American Scientists and Scholars Association, TASSA, held a 3-day convention)  and on to New Jersey, I visited the Public Library in Springfield off Interstate highway 78, which has been holding an exhibition since March 16 called, “Survival of the Human Spirit: Triumph over Adversity”.

Interestingly, the exhibition ends on April 24, Thursday, making people wonder if the end date was chosen deliberately which is the day commemorated, falsely to be sure, as the Armenian genocide day around the world. The exhibition has been created by “The Center for Holocaust Studies at Brookdale Community College”, made possible by a grant from the “New Jersey Council for the Humanities”, a state partner of the National Endowment for the Humanities.

The library, also a museum and full of thousands of books and magazines, was host yesterday to several activities for both the children, adults and Senior citizens, including a “Library Scavenger Hunt.”  Among the many fliers, there was an announcement for “Holocaust  Studies” in Lincroft, NJ for Summer Fellowship Institute for Teaching the Holocaust, Genocide and Human Rights Issues, June 30 – July 11, 2008. The Flier indicates that 2 days will be devoted to the teaching of genocide, including the mythical Armenian genocide.

Another flier was informed that one day after the Library Weekends, Dr Guenter Lewy will be making a presentation on his book and the Armenian issue following the showing of the documentary “The Armenian revolt, 1894-1920” at the Springfield Public Library on Sunday, April 20.

As to this writer’s knowledge, this will be the first showing of this documentary by Marthy Callaghan and a discussion on the Armenian issue by professor emeritus of political science at the University of Massachusetts – Amherst, the author of the book, “The Massacres of Armenians in Ottoman Turkey – A Disputed genocide”, at a Public Library in NJ. Congratulations to the organizers of this event (The Society of Turkish American Architects, Engineers and Scientists (MIM), Mr Omer Kitaplioglu from MIM and the head Librarian Ms Susan Permahos and others who have devoted their time to study this issue.

An Open Letter to the people of the United States of...