Home General Articles Books & Reviews The War of the World, Twentieth Century Conflict and the Descent of... 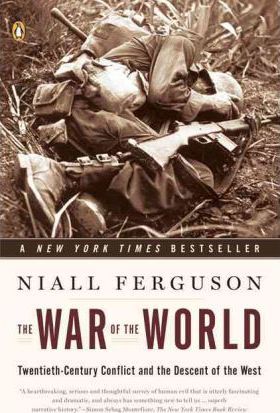 This is a book about World War II, which has been presented to the world as the West’s greatest triumph, between 1939 and 1945, lasting for six years. Niall Fergusson, however, presents the view that the war was actually the result of the fifty-year struggle between rival empires, waged against innocent civilians by their fellow human beings.

Unfortunately, like many other historians and reporters, the book has a one-sided and a biased treatment of the Ottoman Empire’s final days and Mustafa Kemal Ataturk, listed as “Kemal” in the index, never referring to him with his rightful name Ataturk, with much space to the alleged Armenian genocide, although this is outside the scope of the book.

The 808-page book, after a lengthy introduction of close to 40 pages, begins with a look at 9/11, 1901 in the first section of part I, Empires and Races, and makes reference to the Qing and the Ottoman Empires as being the oldest.

In table I.1, the territories and the population of 14 empires in 1913 are presented, including Turkey and the United States (US population 91,972,266, excluding territories and Phillippines, Turkey 29,000,000 and total world 1,791,000,000.) The book is presented under four parts and 16 sections with an Appendix, “The War of the World in Historical Perspectives”.

The events in the Ottoman Empire during the early 20th century (1913-1922) are covered under Section 5 of part I, Graves of Nations, making references to the teachings of Ziya Gokalp, claiming that this paved way to the evolution from an empire into a nation-state, even before the outbreak of the First World War.

No mention of the creation of the Turkish Republic and the heroic efforts of Ismet Inonu to keep Turkey outside of World War II. There are only three brief references to Mustafa Kemal Ataturk, as Kemal (p. 182), where he is mentioned as having played a key role in the defence of Gallipoli against British invasion in 1915.

This is followed by the statements that “Kemal master mined the expulsion of the Greeks from Anatolia, and after entering Smyrna (Izmir), Kemal’s army sealed off the Armenian quarter and began systematically butchering 25,000 Armenians, then setting fire to it, incinerating any survivors.” What a fabrication.

There are numerous references to the Armenian genocide, complete with a photograph of supposedly dead Armenian children and a watercolour painting called “Armenian Horrors.” The author makes reference to Amb.

Henry Morgenthau’s reports about what was being done – including the telling statement of Mehmed Talaat pasha, the Interior Minister, “that all the Armenians had to perish because ‘those who were innocent today might be guilty tomorrow’,” which is a fabricated statement.

It even makes reference to a statement supposedly made by Rafael de Nogales, a South American Mercenary who served as the Inspector General of the Turkish forces in Armenia, that the Governor-General of the providence had ordered that all Armenian males of twelve years of age and over to be exterminated, which again is a fabricated statement.

The author calls himself a wandering scholar and in the lengthy Acknowledgements section, admits that the book is based largely on secondary sources, perhaps many not so reliable. He also states that he pursued certain issues into the primary sources, spending a lot of time at numerous public and private archives, including the United States Holocaust Museum Library and Archives, Washington, DC.

Among the long list of Sources and Bibliography, there are only two books listed by Turks, Turk Inkilabi Tarihi (1952) by Yusuf Hikmet Bayur and “Turkey in the World War (1930), by Ahmed Emin Yalman.

The author promises that a full list of all references will be published in due course on his website www.niallferguson.org.

This is yet another book that presents a distorted view of the alleged Armenian genocide and Turkish history and presents a false image of the Turks to the thousands of readers of this book. I ran into this book looking for a book about America at a small library in Washington, New Jersey, America 1908 by Jim Rasenberger.

I will write to the author and the publisher of this book, pointing out the biased treatment of Turks and never giving credit to Ataturk, the greatest leader of the twentieth century whose statement, “Peace at home, peace in the World” should be the motto for everyone to follow.

I hope the readers of this review will take time to write to the author and the publisher and the Library of Congress and point out to the prejudiced treatment of the Turks.

Open Letter to the following writers in response to their articles...