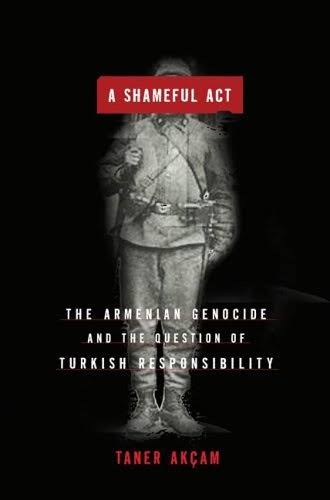 The author, Taner Akcam, is a Turkish and a German citizen. He was born in Ardahan in 1953, in eastern Anatolia, whose father was a very respected educator and writer, Dursun Akcam, who died several years ago and buried without Taner Akcam being present at his funeral.

A Cultural Center established in Dursun Akcam’s name in Ardahan was also inaugurated a few years ago, again without Taner Akcam being present during the ceremonies. So much for the author’s relationship with his family. He studied at the respected Middle East Technical University in Ankara but fled Turkey while in prison due to his subversive activities.

So much for his love of his country. After getting a PhD in Germany, he was hired by the University of Minnesota where he still teaches at the Center for Holocaust and Genocide Studies together with other self-declared genocide scholars, to the surprise of many who know the background of Taner Akcam.

In the acknowledgements section of the book, Taner Akcam states that the origin of his book goes back to his Ph.D. thesis at the University of Hanover in Germany in 1995. He gives special thanks to his mentors, Professor Vahan Dadrian and Professor Peter Gleichmann and much of the material referenced in the book have been put at his disposal by Professor Dadrian, who is known for the misinformation on the subject.

And what is his thesis: The Ottoman Turks deliberately committed genocide, which is disputed by many scholars from different countries and Turkey and the case has never been proved in a court.

Therefore, Akcam’s thesis is nothing more than his personal vendetta which meets Zoryan institute’s goals, the organization responsible for the English translation and probably free distribution to libraries across America, where I also borrowed the 480-page book, surprised that a library in a small town, Flemington, but famous for the “Lindberg Kidnapping Trial”, has a copy.

The book consists of basically 3 sections, with each section heading referring to the Armenian genocide and 10 chapters. There are long explanations on the state of the Ottoman Empire and its non-muslim populations, going back to 1829 when Greece gained their independence.

One of his main goals is to discredit those who have argued that most Armenians lived in peace wherever they were without stating that the conflict arose when Armenian committees began their revolt to establish a state of their own on lands where they were not the majority.

Akcam mentions the battles that the Ottoman Empire fought in the Caucusus, the Middle East and Gallipoli, but reciting never-ending explanation as if the fight was only against the Armenians with the purpose of their total annihilation, for no purpose other than cleansing Anatolia of all Christians as a result of the Balkan wars.

The book is essentially about the party in power during the war, the Committee of Union and Progress (the CUP), with incredible stories on who said what to who, and when, with reference to over 1809 notes for the 10 chapters, a difficult task to follow and cumbersome to read. Akcam makes reference to Mustafa Kemal Ataturk several times, even noting that the British called him “Blondie”, something this writer never heard of before. Akcam also makes references to the trials and execution of those who did not take proper care of the people during the relocation who are described as being responsible for the genocide.

There is also a map of Turkey which is noted as being based on a map of the Armenian genocide by Ara Sarafin, Gomidas Institute, 2005. There is no separate list of References.

There is very little about the uprisings of the Armenians, but claims of an organized massacre of Armenians carried out in Zeytun, Trabzon, Erzurum, Bitlis, Van, Harput, Diyarbakir, Sivas and Cukurova.

On the Van uprisings, Akcam states that it deserves to be examined separately and what really happened has yet to be researched thoroughly. For the benefit of the readers, a review of the book “The Armenian Rebellion at Van,” by Prof. Dr Justin McCharthy, an American professor, is given below.

In close to 100 pages of notes for the 10 chapters of the book, there is not a single reference to Justin McCarty, who has written many books and articles on the Armenian issue, including “The First Shot” that provides information on who started the killings and who is responsible for the tragedy.

Akcam makes reference to Hovhannes Kachaznuni only once (p.198), the first president of independent Armenia and several times the leader of the Dashnak Party, who states that “despite the Dashnak congress’s decision to support the Ottoman regime, inevitably some Armenians would refuse.” That is all.

Again, for the benefit of their readers, an excerpt from www.tallarmeniantale.com on Katchaznouni, and his book, “Dashnagzoutiun Has Nothing to do Anymore”, as reported by Mehmet Perincek, is provided below.

Among the many reader reviews in the amazon.com, the one from “Booklist – a publication of American Library Association” states that Akcam’s book is a companion to Peter Balakian’s Burning Tigris (2003), which is debatable since Balakian’s book is full of distorted and fabricated stories, some of which are attributed to Consular reports, just like the Akcam book which makes extensive references to Ambassador Morgenthau’s Story, a not so reliable source as has been shown by many researchers.

Nothing that the Turks and their supporters write, publish or state will ever change the Armenian’s view of the conflict as a mythical genocide which they believe took place by reading hundreds and thousands of books with falsified and fabricated information, including the consular reports that found its way into Ambassadorial books. This book will also serve their purposes very well.

Therefore, Turks and their supporters everywhere should make every effort to disseminate the truth to Americans by every means and perhaps call on to the United Nations to hold a conference on the Armenian issue to enlighten everyone involved.

Baba Turbeh in Fulya, Besiktas – Modern but Fake – Only in Turkey