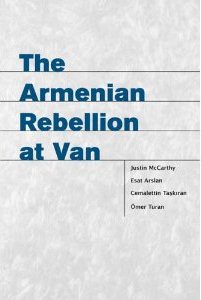 A new book based on years of study and documents from the archives of many nations by Justin McCarthy, Esat Arslan, Cemalettin Taskiran and Omer Turan, published in 2006. Utah Series in Turkish and Islamic Studies, The University of Utah Press, Salt Lake City
Very few books mention the true version of the Van incidents, among them Prof. Dr Stanford Shaw’s `’History of Ottoman Empire and Turkey”.

For years, the world learned about the Van incident through the one-sided books, such as `’An American Physician in Turkey” by Clarence Ussher, which was also made into a movie with the title, `’Ararat” (1). `’The Armenian Rebellion at Van” negates the false tales told in these books and movies, which is summarized in the back cover by Prof. Dr Justin McCharty with the following statement:

`’The Armenian Rebellion at Van” presents a long-overdue examination of Van from 1870s to 1919. As the authors state, `’The Armenian revolt was an integral part of the great disaster that overcame the people of the Ottoman East.

The slaughter of Muslims that accompanied the Armenian revolt in the Van province inexorably led first to Kurdish reprisals on the Armenians, then to a general and mutual massacre of the people of the East.” The actions at Van offer a window into the far-reaching events that soon followed in other parts of Anatolia.

The book has ten chapters, many maps of the region and appendices, including the Armenians in the Van Government, Armenian Refugees, and An Example of Attacks on Villagers. The first chapter opens with a presentation on the ruins of Van and makes reference to the visit of two Americans, Captain Emory H. Niles and Arthur E. Sutherland, Jr on July 24, 1919.

Notes are provided at the end of each chapter, referencing the original documents and providing additional information on the incidents. The first note at the end of first chapter states that `’the report of Niles and Sutherland was deliberately suppressed by those who did not wish their account to be seen”.

The note further states that a draft copy of this report, `’American Commissions to Anatolia and the Report of Niles and Sutherland is found among the detritus of the American Harbord Mission” (2).

The book tells the story of Armenian uprisings and revolt against their own government. The following is from the first chapter:

“The Armenians of Van had revolted against the Ottoman government, putting their trust in the Russians, who betrayed them. They and the Russians had driven the Muslims from the province.

The Armenians were, in turn, had been driven out. Theirs was the final exodus. Surviving Muslims returned. Neither side, however, can truly be said to have won the war.
More than half of Van’s Armenians had died, as had almost two-thirds of its Muslims.”

Chapter four gives the details of the `’Rebellion in 1896”, followed by the `’Development of Revolution, 1897 – 1908”, all before 1915, the year that the Armenians and their supporters would like to begin, completely ignoring the events that brought about the re-location of Armenians in Eastern Anatolia.

Chapter seven explains the events on `’Kurdish Revolt and the Inspectorates, 1912 – 1914” while the Ottoman government was in an impossible situation in Eastern Anatolia during the brief alliance between the Committee of Union and Progress and the Dashnaks and the military events, especially in the Balkans (3).

Chapter eight, `’World War I and the Armenian Revolt in Van” clearly shows that the incidents portrayed as Armenian self-defence was actually Armenian rebellions with the support of the Russians who had already invaded Iran in 1908, occupying northwestern Iran by 1914. Men and arms were routinely smuggled into Eastern Anatolia and Van from the Russian occupied regions for the Armenian revolutionaries.

Chapter nine describes the `’Destruction and Murder in Van”, with many references to the torture, rape and murder of Muslims by the Armenian revolutionaries, without giving any details purposely, except the testimony of Ibrahim Sargin (Note 1, p. 251). Note 20
(p.252) states that `’American missionaries Mrs G.C. Reynolds and Clarence Ussher made some small admission of murders of Muslims”, followed by a brief testimony of Ussher, even stating that `’The flaws in Ussher’s work are also an indictment of missionary reports in general.” On Ussher’s motives, the authors state that `’Ussher plays upon all prejudices of the time.

According to him, the Germans were responsible for the Armenian troubles; Muslims hated Christians and routinely beat and persecuted Armenians; once defeated, the Muslims would convert to Christianity.”

Van rebellions, which is one of many rebellions in Eastern Anatolia, such as the Sasun-Zeytun incidents and also mentioned in the book, forced the Ottoman government to re-locate the Armenians to Syria.

Our thanks to everyone for making this book a reality, which should be read by everyone interested in the resolution of the Armenian issue and copies sent to every US congressmen and others.

(1) For a review of the movie `’Ararat”, please see `’Ararat – A Propaganda Film of Imagination and Distorted History.”

(2). For a brief description of the Harbord Mission, please see the article, `’Harbord Mission Documentary on TV8, 28 March 2004.” Although US Chairman of Joint Chiefs was sent to eastern Anatolia by president Wilson who also met with Mustafa Kemal and Kazim Karabekir, and issued a Report but not presented to the US Congress.

(3) There has been a surge of articles on the activities of the Kurdish tribes during those years, latest in 15 – 21 February issue of Nokta magazine, `’Nokta Tartismaya Aciyor – 1915 Felaketinde Kurtlerin Rolu ‘Nokta Opens for Debate – The Role of Kurds During the Catastrophe of 1915.”