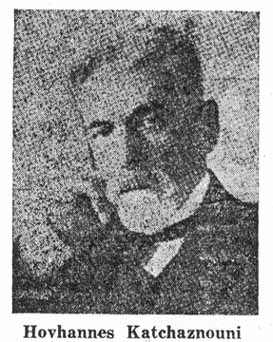 He was born in 1867 in the Akhaltsikhe (Ahýska) region of Georgia. Having studied architecture, he worked as an architect in Baku. He joined the Dashnag organization there. He became a member of the Armenian National Council in 1917 and was the Dashnag representative in the Seym (the Caucasian Parliament) until 1918. He was on the Armenian committee, conducting the peace talks with the Turks in Trabzon and Batoum.

After the dissolution of the Caucasian State, he became the first prime-minister of the independent Armenian State in 1918. He held this position until August 1919. He was arrested after Bolsheviks came to power in Armenia in 1920. He left the country after the counter-revolutionary revolt against the Bolshevik rule was suppressed in 1921. Years later, he returned to the Soviet Armenia to work there as an architect until his death in 1938.

Publication of the Report

Katchaznouni voices a self-criticism of the past in this conference report. This self-criticism is actually a confession. Katchaznouni honestly and sincerely resolves that the Dashnagzoutiun Party is responsible for the past agonies. He concludes, at the end of the report, that the Dashnagzoutiun Party should dissolve itself and leave the political arena. His last words are significant: “Yes, I propose suicide, the party should commit suicide,” he says.

Katchaznouni publishes his report very urgently, that same year. The title he uses once more emphasizes his proposal of suicide: “Dashnagzoutiun Has Nothing to do Anymore”
Katchaznouni omitted some three or four pages concerning his proposals about the inner organizational issues of the party when he first published this report as a book. However, he included in the book a letter he wrote to a fellow party member who had criticized his report in his letter.

What is interesting but what seems natural when the content of the book is taken into consideration, is the fact that this historical report by the first Armenian prime minister was banned in Armenia. It is also a fact that all the copies were collected from the libraries in Europe by Dashnags. All the copies in all the languages were collected from European libraries. The book is included in the catalogues but no copies can be found in the racks.
I discovered a copy of the Russian edition in the Lenin Library in Moscow, during my research on the Armenian issue. The book was translated into Turkish by Arif Acaloðlu with utmost care and precision and I would like to extend my thanks to him here for his worthy contribution.

Nothing that the Turks and their supporters write, publish or state will ever change the Armenian’s view of the conflict as a mythical genocide which they believe took place by reading hundreds and thousands of books with falsified and fabricated information, including the consular reports that found its way into Ambassadorial books. Therefore, Turks and their supporters everywhere should make every effort to disseminate the truth to Americans by every means and perhaps call on to the United Nations to hold a conference on the Armenian issue to enlighten everyone involved.

Allianoi, The Last Trip to the Ancient Spa in Turkey : Picture(240), Allianoi

About the name of the Etruscan King LUCIUS TARQUINIUS PRISCUS by Dr. Polat...

Name of “EUROPE” in Chinese is known as “OUZHOU”