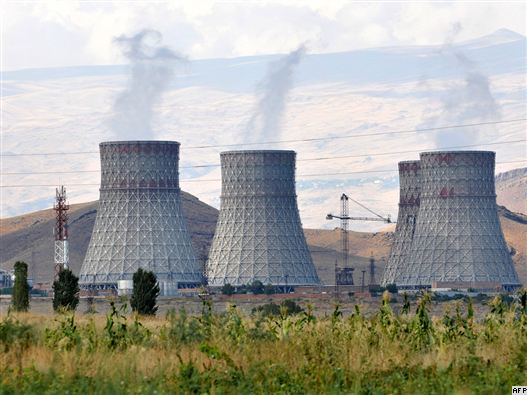 A one day conference on Nuclear Energy was held at the Lutfi Kirdar Conference Center that lasted almost 10 hours with a luncheon where the CEO of Calik Holding Ahmet Calik was the guest speaker. The conference, organized by Strategic, Technical, Economic Research centre (STEAM), followed another Energy conference that was held in November 2007, only 2 months ago.

Businessmen interested in investing in the sector as well as many international and local supporters of nuclear power participated in the conference.

Highlights of the Conference

The conference, attended by close to 300 professionals and the members of the media, opened with a speech by Amb (R) Yaman Baskut, followed by a presentation by Faruk Demir and the Minister of Energy Hilmi Guler.

Yaman Baskut, stated that he has been involved with energy for the past 25 years and made reference to a word in Japanese, ‘’KEKI’’, which he said refers both to ‘disaster’ and ‘opportunity’. He also characterized the energy market in Turkey as ‘a den of intrigues – cadi kazani’’.

Faruk Demir, speaking on behalf of the organizing committee, stated that the tenders for the nuclear power plant will not be prepared behind closed doors, and referred to openness and transparency in the preparatory work to date.

Dr Hilmi Guler began his speech by stating that the government is determined to build nuclear power plants this tie around, the 4th attempt in almost 40 years.

He said that the legal infrastructure has been established and public opinion is in favour of building Nuclear Power Plants. The minister stated that the electric power sector fuel diversification Ýs built one five pillars; hydro, natural gas, lignite, renewables and nuclear.

The Minister also stated that the regulations will be published on January 21, 2008, as scheduled and tender documents will be issued on February 21, 2008.

Mr Akira Omoto, IAEA Director, Division of Nuclear Power, spoke about the support that the Ýnternational Atomic Energy Agency can provide to countries considering the introduction of nuclear power. Mr Amoto stated that building a nuclear power plant may take anywhere from seven to sixteen years, including assessment, preparing the infrastructure and construction.

Peter B. Lyons, a commissioner from the US Nuclear Regulatory Commission, made a presentation on the U.S. experience in the regulation of nuclear energy.

Peter B.Lyons started his presentation with a quotation from Ataturk, ‘’The most genuine guide in science.’’ He stressed the importance of an independent and competent regulatory body and international cooperation.

Ms Barbara Thomas Judge, the Chairman of the British Atomic Energy Agency, presented a summary of United Kingdom’s experience and the development of French nuclear industry as a result of 1973 oil crisis, leading France to have the highest generation of electricity with nuclear energy (78%).

Ms Judge congratuþated Turkey for embarking on the nuclear path and offered her agency help in nuclear power production. 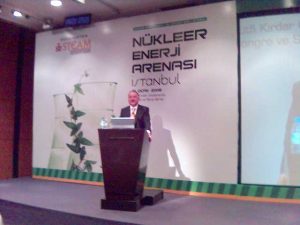 Assoc. Prof. Dr Volkan S. Ediger, the energy Advisor to the President of Turkey, spoke about Turkey’s dependency on foreign natural resources, commenting that Turkey imported $28 billion worth of energy last year and Dr Necmi Dayday from Galatasaray University, made a presentation on the international dimensions of nuclear energy,

The Chairman of Energy Technologies Platform Muzaffer Basaran, gave detailed information on the existing and planned nuclear power plants around the world. Three experts, Former Treasury Deputy Secretary, President of TETAS and a representative from Natixius Pramex Intr., made presentations on the investment and financing models in nuclear energy.

During the afternoon sessions, representatives from various foreign companies made presentations on nuclear energy technologies, including German, US (both GE and Westinghouse), Canadian and Russian.

However, there were no representatives from the French or the Japanese reactor makers. Several representatives of Korean Nuclear Energy sector companies, Korea Electric Power Corporation and Korea Power Engineering Company, attended the conference as listeners.

The final session of the conference was on the discussion of problems and solutions, which was moderated by M. Faruk Demir, who asked 3 questions to be answered by the panellists, emphasizing environmental concerns, including AKP Deputy Taner
Yildiz:

Prof. Dr Sarman Gencay was among the speakers who raised many questions on the path forward, complaining about many issues (Evidently, during or after th conference, a new group called Turk Nukler Enerji Forum, issued a declaration and an open letter to the media members and to government and state officials on their concerns, which was posted on the nuclear energy yahoo group web page.)

The conference was very timely and intense, lasting close to ten hours, covering many different aspects of nuclear energy, including the point-of-view on the construction, operation and financing aspects.

A presentation on the licensing aspects of the project would also be very helpful. The initial announcement had indicated that Hasan Koktas, the new head of the Electricity Market Regulatory Authority (EMRA) appointed recently would also be speaking at the conference, but was not present. There was no one from the Atomic Energy Agency of Turkey (TAEK), which was probably the most important issue to be discussed.

A major portion of building nuclear power plants will certainly fall on their member’s shoulders. A request for a list of attendees was denied, something this writer faced the first time.

Building nuclear power plants is exciting and will add tremendously to the Turkish economy and present new opportunities to young engineers and scientist in Turkey and from abroad as well.

The winning contractor will not only have an opportunity to build Turkey’s first nuclear reactor but also have a chance to provide long term service to the power plant for many years to come, perhaps up to 60 years.

PS. On 18 January, Friday, the same day that the Nuclear Energy Arean was held, an Open Letter was distibuted to the press and also sent to various organizations (except the Ministry of Energy and Natural resources and the Turkish Atomic Energy Agency), outlining the concerns of 34 nuclear scientists under the leadership of prof. Dr. Sarman Gencay, one of the speakers at the conference.

The Sardinian Capital City NORA and Sardinian Kinship With the Phoenicians (GÜNHANS) (Part-...