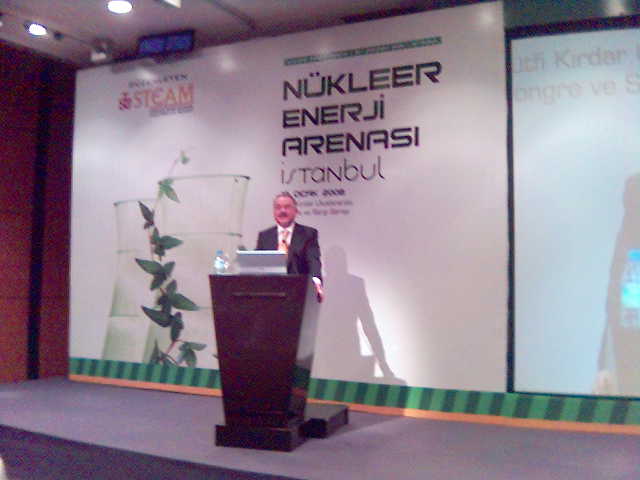 The US Department of Energy and the Turkish Ministry of Energy and Natural Resources were the two main sponsors for the 2-day conference organized by the ATC (American Turkish Council) from WDC, TAKI of DEIK (Turkish-US Business Council) (The Foreign Economic Relations Council) and TUBITAK (Scientific & Technological Research Council of Turkey).

Many energy companies from Turkey and GE from the US were among the other sponsors. The delegation from the US consisted of over 45 representatives from government organisations, laboratories and universities. There were also several representatives of the US private sector, including GE, Foster Wheeler, and others.

Wind, Hydroelectric, Clean Coal, Solar and Bio-Fuel were among the Clean Energy technologies that were covered. There were also presentations on the various organisations involved in the Energy Sector, both the US and Turkish, except there were participants only one or two companies from the US private sector, although some of the speakers made statements that the Turkish companies are looking for American companies to form joint ventures wýth.

Following the opening remarks by the Conference Chairman, Charles D. Hartman of ATC, Ambassador James H Holmes, President of American-Turkish Council and Ali Koc, the Vice-Chairman DEIK/Turkish-US Business Council spoke about the US-Turkish relations. These were followed by a speech by Sharon A. Wiener, US Consul General and Rona Yircali, Chairman of the Executive Board, DEIK.

The Hon. Alan Hegburg, Deputy Asst. Secretary for International Energy Policy, US Department of Energy welcomed well over 300 attendees to the conference and Hilmi Guler, the Minister of Energy & Natural Resources spoke about the energy policies of Turkey.
Minister Hilmi Guler stated that Turkey and the United States would carry out projects on clean energy technologies to further improve cooperation between the two countries, emphasizing that “The United States and Turkey have fought for democracy in Korea, Somalia, Bosnia-Herzegovina and Afghanistan and we have succeeded. Now, we will further improve our alliance with these projects,”

The keynote speakers were Charles E. Washington from the US Department of Energy and Dr Joseph Strakey, Chief Technology Officer, National Energy Laboratory.
Charles Washington emphasized the urgent need to develop alternate energy sources, a collaboration between the Turkish and American companies and the enhancement of Turkish-American relations, which has concentrated in the past on defence-related issues.

Presentation on ‘’Coal Benefication to Increase Efficiency and Lower Emissions’’

Dr Joseph Strakey stated that the US has 250 years supply of coal, mostly lignite, which he said has to be used in an environmentally acceptable way. At the end of 2006, coal accounted for 49.6 % of electricity generation which is expected to increase up to 57.4 % by 2030 and gave the following data on US electricity generation (2006 figures);

The following were listed as the challenges for the US Energy administrators:

Reduce the cost of electricity

Reduce the cost of carbon capture

Dr Joseph Strakey presented information on the world’s first near-zero emission, coal-based power plant, estimated to cost one billion which has already increased to $1.8 billion. Strakey emphasised the government-industry partnership on clean coal initiatives over the next 10 years.

Presentations were made on a wide variety of subjects, from ‘’Power Supply and Demand Projections’, ‘’New Schedule for Distribution Company Privatisation’’ to ‘’Private Sector Issues with Privatisation scheme.’’

On the privatisation of distribution companies (which has been on and off since 2000, the last tenders in 2007 having been cancelled by the Prime Minister), Isa Altindas from the Privatisation Administration stated that tenders will be issued and the privatisation will be completed in 2009.

The GM of TEIAS spoke about the recent developments and stated that they have been basically performing a crisis management task than planning for future growth. Dr.
Vedat Gun from the Energy Affairs Department of MENR presented an update on the status and the schedule of new power plants under construction and in planning stages.

Ismet Turan from the EMRA (Electriricy Market regulatory Authority) made a presentation on the ‘’Evaluation on the Development of  Turkish Energy Sector During the Next 10 Years.’’.

The presentations during the afternoon sessions included technologies for high efficiency power generation, solar energy and reducing carbon dioxide emissions, with several participants from the US Technology and National Laboratories among the several presenters.

Larry Mansueti, Director, Office of Electricity Delivery and Energy Reliability, DOE, US, presented information on the status of Hydroelectric power development, including the number of projects owned by the Bureau of Reclamation, Army Corps of Engineers, TVA, others and the private sector.

Esref Ozcelik, Advisor to the General Director, Turkish Electromechanics Industry Corporation (TEMSAN), presented information on the only manufacturer of small hydro-turbines in Turkey.

Ozcelik stated that in their factories in Diyarbakir and Ankara, TEMSAN has completed the upgrade and rehabilitation of several operating hydro-electric power plants in Turkey.

The panel was moderated by Dr David, ‘’Wind Energy Technology Application and Testing, National Wind Technology Center’’ from the US who also made a presentation on the Technology Center’s activities, and Dr. Uygar Ozesmi the GM of TEMA, an organization for the protection of the environment.

The first speaker, Salim Arslanap, GM of Zorlu Enerji, made a detailed presentation on their 245 MW Osmaniye windfarm (near Hatay) which consists of 3 separate projects. 1) 135 MW Bahce, under construction, 54 units, 2.5 MW GE WTs. 2) 50 MW Saritepe, and 3) 60 MW Demirciler, the last two licenced with construction to start soon with 3 separate interconnections. For the first project, the delivery of turbines will begin in July 2008, with 6 to 9 turbines per month. Arslanap stated that the capacity factor at the first site is 45% and will have full SCADA application. Arslanap then listed the major problems in the realisation of wind farms in Turkey:

On the actual development of wind farms, he mentioned the following issues:Ý

Arslanap also mentioned that they are developing a 50 MW wind farm in Pakistan and that Zorlu Energy has just signed a carbon credit agreement with EcoSecurities of Ireland for 400 tons of CO2 that will be saved with their 135 MW Bahce wind farm.

The second speaker, Erol Demirer made a presentation on the activities of their company (Demirer built the first wind farm in Turkey, Cesme, ten years ago and has tower and blade manufacturing factory in Izmir) and the view of the wind power investors in Turkey. He stated that Demirer is developing a 39.2 MW wind farm next to their small farm in Cesme, near Izmir.

Demirer mentioned that in 2008, the world installed wind capacity will reach 109,00 MW, commenting that this figure is 20% of the nuclear share in the world and suggesting that in 10 years, wind capacity will surpass nuclear. After references to the difficulties that they faced since 2000 when they had several projects proposed under the BOT scheme, Demirer mentioned that the Law No 5436 on Renewable Energy opened the way and that they have several projects that are ready for development. He listed the following issues as the limitations for future
developments:

There are a limited number of big cranes

The next speaker Murat Durak, the President of the Turkish Wind Energy Association, gave an overview of the wind power sector and presented the following table on the wind power applications:

Durak stated that the installed wind capacity now is
146.5 MW (other speakers stated as high as 200 MW) reaching to 1,000 MW by 2010, under construction 601 MW, licensed 2,500 MW. There was no mention of how the selection of new wind applications for development would be made. (www.ruzgarenerjisi.org.tr)

Dr Yuksel Malkoc from the EIEI (Electrical Power Resources Survey and Development Administration, made a presentation on their activities and the development of the ‘’Potential Wind Atlas of Turkey’’. Wind speed is classified under 7 classes, ranging from 5.5 to 9.0 m/sec and showed maps developed with readings at four levels, up to 100m. Malkoc also made a plea that wind measurement devices should be manufactured in Turkey.

Dr David Simms made detailed presentations with slides on the activities of the wind Energy Technology Application and Testing Center
(david_simms@nwtc.doe.gov)

Observations and Comments on the Conference

There were no handouts given at the conference and the organizers stated that the documents would be posted on the American Turkish Council web site (www.the
–atc.org) which so far have not been made available yet. There were over 45 participants from the US government organisations but very few from the private sector.

During an interview with one of the news agencies, James Holmes stated that the agreements signed with the US companies back in 1996 were not put into service and the takeover of the Cukurova and Kepez Elektrik had a negative impact, but this things are in the past and the Turkish and Us companies should start workþng jointly on the many projects that need to be developed.

The emphasis of the conference was on the technologies and the research being carried on in the US, which is necessary for the development of a healthy energy sector in Turkey as well.

During conversations, references were made on the Nov 1, 2007, applications for 78,000 MW wind projects, and representatives from EMRA stated that work on a method of selecting those that have the highest potential for development and the possibility of interconnecting to the grid system is proceeding, but a set date as to when this would begin was not given.

Overall, this was a very good conference.

About The Etruscan Pyramid At Bomarzo, ITALY and Words Related to The Concepts of...