Bayburt is one of 81 provinces of Turkey, probably the smallest, but with a long history that dates back 2,400 years. Dede Korkut lived there many years ago, giving a reason for the people of Bayburt to stage a festival there every year.

Coruh River, which originates in the valleys of Erzurum, goes through the centre of the city, meandering along the rugged mountains towards the Black Sea and passes in front of a village called Bayraktar, once known as Baksi. Overlooking the Coruh valley and high on a mountain near the village of Baksi, a Museum and a Cultural Centre is coming to life, like no other in Anatolia.

Dean of the Fine Arts Department at Marmara University, Prof Husamettin Kocan, who was born in Baksi, is the creator of the Baksi Museum and Research Center of Folk Art.

Melih Fereli, Chairman of the Executive Committee of Project 4L at the Istanbul Museum of Contemporary Art, states the following in a catalogue, ‘’Shaman’s Diary’’: ‘’Nowadays, one should really have been at the small village of Bayraktar in Bayburt, in order to experience the euphoria on the occasion of a very significant turn being taken in the process comprising efforts that focus on bringing back the enlightened days of Anatolia, and to witness a truly universal statement being made’’.

The first section of the Museum opened on August 19, 2004, which I missed. On October 30, I drove 184 km from Erzurum on a rainy day to see the visionary place.

There is an incredible view of the Coruh river from the grounds where the beautiful Museum with guest rooms and several small buildings with stone facade have already been completed.

The work on the main building is expected to begin in 2005 that will include workshops for the villagers. 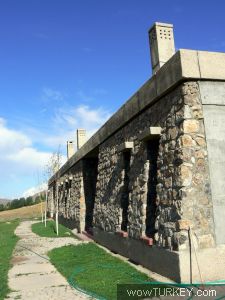 The Museum is being developed privately, which will eventually include several buildings housing an Exhibition Center for Permanent Collection, a Conference Hall, Guesthouses, Ethnographic Museum, space for Traveling Exhibitions and Workshops. Some of the paintings donated by 123 artists (3 times the lucky number 41) are already on the walls of the Museum, which were recently exhibited as ‘’Shaman’s Diary’’ in Istanbul.

There are guest rooms in the two-level Museum, where visitors can stay, keeping up with the long lost tradition of ‘’village guest houses’’ of long by-gone days.

As Husamettin Kocan writes in the preface to the 300-page catalogue, ‘’Shaman’s Diary’’, the Centre will also perform as an organized economic operations and states that ‘’This project aims further by trying to construct a basis for all that has been forgotten, all that has been lost, all that has been dreamt by those that have left behind their homes.’’

The village of Bayraktar is home to 480 inhabitants who live in 80 homes and make a living with agriculture and livestock, like most of the villages across Anatolia.

Bayraktar has seen the migration of many of its residents to nearby cities like Bayburt and too far away metropolitans like Istanbul. It is most likely that there are people from Bayraktar who have migrated to Europe and the Americas.

Ahu Antmen writes in the same catalogue that the Baksi project is about the places and the people left behind, but it is also about people who built new lives in new places, and states that ‘’It is a project about what it means to look from far away, and it aims to bring an alternative to just looking.’’

Ahu Antmen also states that ‘’The Baksi Museum and Research centre of Folk Art is a project about artists coming together, about art and what it means in a more social sense, and about certain ideals shared by artists. That deserted land on top of a mountain, or any deserted mountain, anywhere, seems much less lonely, much less silent now.’’

The Baksi Museum and Research Centre is an incredible place high on the hills overlooking the Coruh river which will mark its place on the map of Anatolia.