Home General Articles Culture Newspapers in Turkey and the debut of a new daily, GASTE ... 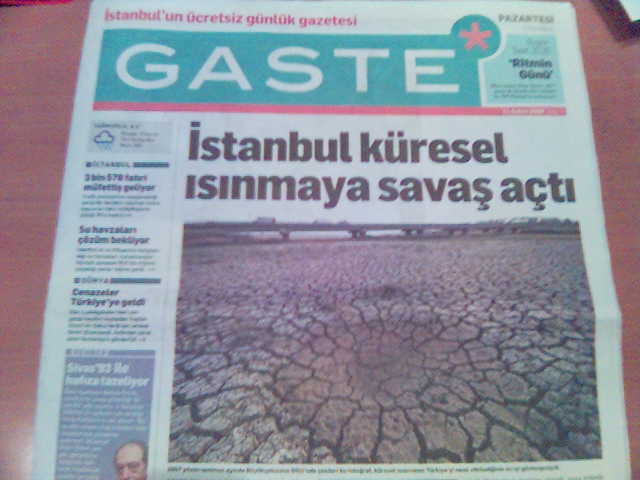 A new newspaper hit the streets of Istanbul this morning, delivered by young men and women who handed me the first issue near the newsstand in Besiktas..

The tabloid-size newspaper, called GASTE, (a slang version of the word GAZETE – Newspaper, I suppose,) is 32 pages, more than half full of advertisement, most full page. The publisher in the ‘’facts corner’’ promises that the advertisement pages would not exceed 50%  of the paper. The GASTE is the first of its kind in Turkey and is distributed free of charge.

The paper is in Turkish except the owner’s name is listed as ‘’Free News Iletisim Ticaret Anonim Sirketi’’ and the CEO is by Pelle Anderson, a veteran Sweedish publisher, who has written a column on the importance of newspapers in the first issue. Other information given in the facts corner includes that the newspaper will carry local, national and international news in a condensed form and has no connection with any religious or political organisation, even claiming that it has the most reader in Istanbul.

Turkey has probably more newspapers than most countries in Europe, although the readership is not very high. According to the latest poll, there are over 41 national daily newspapers and close to 2,500 local newspapers across Anatolia and Thrace. About a month ago a new daily hit the newsstands, TARAF, which costs 1 YTL (Cumhuriyet sells for 75 YKS, others vary from 25 to 50 YKS.)

English-Language Newspapers in Turkey and Other Publications

In January 2007, a new daily English language newspaper made its debut in Ankara with a reception at Sheraton Hotel, attended by the Prime Minister, Minister of Foreign Affairs and many other dignitaries. The first issue of ‘’Todays Zaman’’ was presented to the Prime Minister, who commented on the importance of multiple voices in the media. This brought the number of English dailies in Turkey to three, the other two being ‘’Turkish Daily News’’ and ‘’The New Anatolian.’’ Todays Zaman is published by Feza Yayincilik, and its Editor-in-Chief is Bulent Kenes. Foreign correspondents who regularly write in this newspaper include Nicole Pope and Andrew Finkel, long-time residents of Turkey, whose articles appear in the western media and both have written books on Turkey.

‘’The New Anatolian’’ celebrated its third anniversary on February 2, 2008, published by the ‘’Cevik Family’’, the pioneers of English language newspapers in Turkey. Several years ago, The Turkish Daily News started by the Cevik family was bought by the Dogan Publishing group and the Cevik family, becoming unhappy with the acquisition, decided to publish a new newspaper in 2005, hence ‘’The New Anatolian’’, which includes ‘’Turkey’s only independent English-language Daily’’motto above its title. Ilnur Cevik is the Executive Coordinator and the Chief Columnist with Mete Belovacikli as the Editor-In-Chief. The newspaper has good coverage of Turkish and international news and publishes regularly announcements of important events, followed by their reviews.

‘’Turkish Daily News’’, which includes ‘’In the 46th Year as Turkey’s English Daily’’ above its name and Ataturk’s famous quote, ‘’Peace at Home, Peace in the World’’ as its motto, was the pioneer English language newspaper. For many years, it was the only English-language newspaper in Turkey. Chief Executive Editor is Nuri M. Colakoglu with Eyup Can Saglik as the Executive Editor. The former USA correspondent and an editor of ‘’Referans’’ newspaper, David Judson, is the Editor-in-Chief. The headquarters of the newspaper was recently moved from Ankara to Istanbul.  HYPERLINK “http://www.tdn.org” www.tdn.org.

ANKA started its daily news service in English in March (2007) under the management of veteran journalist Esra Erduran. In addition to local and international media organizations, the ANKA daily news service in English will provide a vital service to the diplomatic corps in Turkey, local and international economic actors as well as those who want to observe and discover Turkey via an independent news agency.

TEBA publishes a weekly magazine that provides detailed information on the economic developments in Turkey.

There are several other foreign-language newspapers published in French, German, Ýsraeli, Greek and Armenian, including AGOS, which is published both in Turkish and Armenian… The Herald Tribune, now also printed in Turkey, and the Financial Times are also read widely in Turkey.

Observations from the Leaders of Change Summit at the Istanbul Convention...

Open Letter to the following writers in response to their articles...