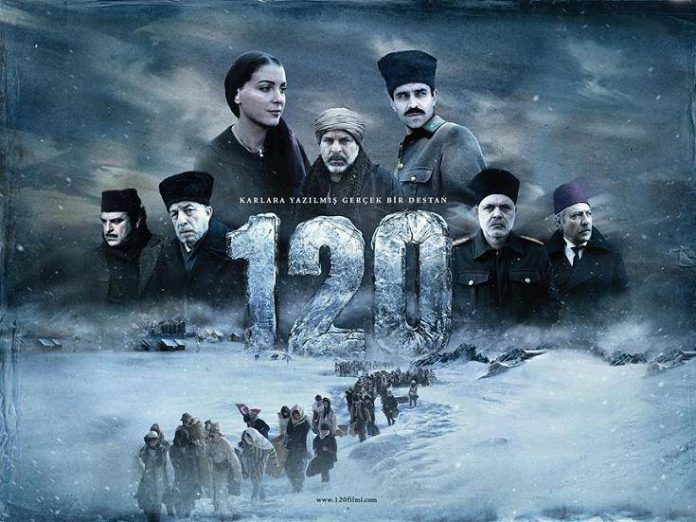 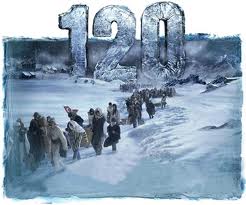 During the Sarikamis Battle, the Ottoman army runs out of ammunition and appeals to the people of Van for help, who happen to have supplies. However, the First World War is on and all men are fighting at four corners of the empire and therefore can not respond to to the appeal.

The young children of Van want to do something. When the Principal of a school, who has lost a son in the war, suggests that the ammunition be transported to Saraikamis, 120 young boys aged 12 to
17 volunteer and take to the road.

The movie tells the true story of the 120 boys and their sisters and mothers left behind, who wait for their return. The scenario, written by Ozhan Eren (1), who also provides assistance to the director and has composed the music as well, is tragic but tells the story of a tragic period of the Turkish history, which in the past have been presented to the world in a twisted manner, such as the movie Ararat.

The movie, filmed in Safranbolu and Van, opens with a scene where an Armenian doctor goes to the house of a Turk whose son is sick, as he has done many times before. One of the boys do not like an Armenian doctor providing medical service to Turks, who, he believes are out to destroy the Turks.

At the same time, the Armenian members of the Hunchaks in Van, who gather at a church and vow to join the Ýnvading Russian armies, threaten the Doctor and kill him as he leaves the sick boy’s house.

Afraid of the Russian troops approaching Van, many families plan to go to Istanbul, including the angry father of one of the boys, who refuses to leave and joins the group who want to transport the ammunition to Sarikamis.

After a brief training by Turkish soldiers, the boys gather in front of the mosque across from the Van castle, the only remaining structure of old Van destroyed by the Hunchaks, and begin their long march. It is winter and the weather is tortuous.

They march on and at one point being attacked by the Hunchaks and lose three of their comrades, including the young army officer whose fiance lives in Van. They deliver the ammunition and begin their return to Van. During the long march back, 98 of the 120 boys die and those who return are taken to the hospital for treatment.

It is a sad story, one of the hundreds of true episodes that are waiting to be told. During an interview on TV8 last night, Ozhan Eren commented that a nation that he did not want to name fought 3 wars and made over 1,000 movies, but the Turks who fought in Canakkale, Cucauses, the Arabian deserts and the Balkans and the War of Independence are just beginning to tell their stories.

This is an excellent movie which may pave the way for others to tell the true story of events during the First World War, a movie that everyone interested in the true history of Turkey should see.

Notes (1).  Oren has also written the verse and sings the song ‘’Kara Tren.’’

KAZIM KARABEKIR – A Person and a Soldier Exhibition at...

Turkish Tea and Open Letter to Katherina Branning in the United...