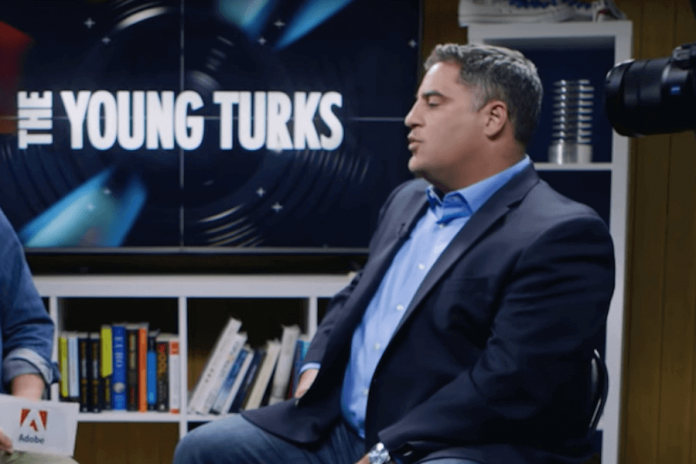 During the 1 hour program on Current TV (Channel 107) on 14 February 2012, Cenk Uygur, the founder of “The Young Turks”, revealed that a documentary would soon be released on his unique public access show. Brief segments from the documentary were shown with Cenk Uygur telling the audience that he had a great law degree but threw it in the wastebasket in order to contribute to the media in America that he loved so much. Appearing in the segments from the documentary, several of his friends commented on his ambitions and his father, Dogan Uygur, stated that he was surprised on his son’s choice of a career.

The Young Turks started as a Radio Talk Show ten years ago and continued as online TV. The show later moved to CNBCE, but was cancelled due to his harsh criticism of the developments in the political arena. His show appears daily on Current TV which is repeated several times each day.
The 10th-anniversary program covered several current topics and opened with an interview with Andrew Breitbart, a conservative activist and publisher (biggovernment.com), where a heated debate took place on the activities of the “Occupy Wall Street Movement.” At times, both talking simultaneously, Andrew accused Cenk and liberals that they were presenting the Tea Party as a terrorist organization, and at times Andrew referring to Cenk Uygur as a terrorist looking guy. There were a lot of accusations back and forth on the “Occupy Movement” as well, with videos from demonstrations, which was difficult to follow. In fact, during the show on the following day, Cenk Uygur stated that the interview with Andrew was the longest ever (13 minutes) where Andrew spoke the most, with all kinds of comments, and accusation on the sexual conduct of the movement participants, quite unusual to say the least.

The second topic of discussion was on the GOP presidential race and Rick Sontorum’s surge in the polls. There were several comments on Santorum’s political life and a video on his confrontation with the “Occupy movement”. There were also discussions on Mitt Romney’s ad campaigns.

The use of Drones by the US military in foreign countries which has resulted in the death of many innocent people was also discussed followed with “drum-beat for war with Iran.” Commenting on the extensive coverage of the Iranian threats against America, Cenk stated that all Iran said was that they would retaliate if they are attacked. Contacted by phone, an expert on the Iranian situation, Glenn Greenwald presented a long analysis from Rio the Janerio and referred to NBC’s broadcast demanding protection for the world from an Iranian attack.

The final topic was a discussion on the payroll tax proposal, argued by 3 members of “Power Pane” from Andy Kroll from “Mother Jones”, Elise Foley from “Huffington Post’ and Ari Berman, author of “Herding Donkeys”, individuals usually not seen on the main media. (The proposal became law the following day).

The show ended with a celebration of the 10th anniversary with scenes from earlier programs and some insight into what they will be doing during the next ten years, including perhaps a trip to the Bahamas for the staff.

Cenk Kadir Uygur (Turkish pronunciation: [ˈdʒɛŋk ˈujɡur]; born March 21, 1970), is the main host and co-founder of the progressive[2] Internet and talk radio show, The Young Turks (TYT).[3][4] A naturalized U.S. citizen, Uygur was born in Turkey and raised from age eight in the United States. He worked as an attorney in Washington D.C. and New York before beginning his career as a political commentator. Originally a moderate Republican, he has since become a staunch critic of the Republican Party and has adopted more progressive and liberal views.[5][6]
In addition to hosting TYT, Uygur appeared on MSNBC as a political commentator in 2010, later hosting a weeknight commentary show on the channel for nearly six months—until the time slot was given to Al Sharpton.[7] Shortly after leaving MSNBC, Uygur secured a show on Current TV that began airing on December 5, 2011 before Countdown with Keith Olbermann.[8]

Oldest Sanctuary In The World Gobklitepe, ŞANLIURFA, TURKEY, Dates Back...