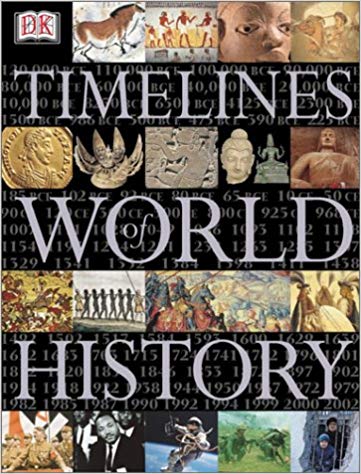 Timelines of World History is an excellent reference book, a product of fifteen years of self-study by John B. Teeple, whose great uncle, a civil engineer and a devotee of world history, gave him the idea and most of the material. Unfortunately, Mr Teeple died in 2002 before the book was published.

The book, first published in 2002, has been reprinted in 2003 and 2006, hence thousands of copies are available at libraries across the USA. It begins with the Origins of Life on Earth and concludes at the outset of the 3rd Millenium. The first section covers the 10,000 to 500 BC span and advances through the years to the period from 1800 to 2005 in five-year intervals, full of maps, photographs, list of dynasties and historical facts. It is a very useful reference book and I enjoyed going through its pages, which will be good reading material, perhaps for the next 15 years. It is close to 800 pages.

However, there is one subject that I believe has not been presented fairly without telling both sides of one of the most tragic events of the 20th century. That is the uprising of the Armenians in Eastern Anatolia which caused the death of hundreds of thousands of Moslems and subsequent relocation of Armenians which resulted in more deaths. Most Armenians would like the world to recognize this as the Armenian Genocide, which is a fabrication and a propaganda material used against the Turks and Turkey.

First, the tragic event of those war years can not be told without mentioning the ‘’First Shot’’ by the Armenians. There is no mention of the massacres of Ottomans as a result of Armenian uprisings to establish a state of their own on lands where they were not in the majority. Second, the Turkish-Armenians were relocated to other parts of the Ottoman Empire due to war conditions and many were allowed to return after the war, although most chose to immigrate to US, Europe and other countries. The number of Turkish-Armenians that were relocated was probably no more than 600,000 and those who died was probably less than 300,00 according to many publications of the Turkish Historical Society. Therefore, Timelines of World History is doing a disservice to its readers with falsified numbers.

Under ‘’Wider World, 1914-1918’’ (p 397), the author again makes reference to the death of Armenians (one million massacred or deported by Turks) without any reference to the death of Turks by the Armenians. Also, there is no mention of the ‘’Battle of Gallipoli’’ won by the Turks against the invading British, Anzac and other forces, which in a way encouraged the continuation of the Armenian uprisings and also changed the world history. Even Robert Fisk, the British writer, has praised the Turks on their accomplishments at Gallipoli.

I trust the publishers of this book will consider revising the sections under Armenia and in fact, no publication should ever write about the death of Armenians without also including the death of Ottoman Turks by the Armenians who fired the first shot.

Oldest Sanctuary In The World Gobklitepe, ŞANLIURFA, TURKEY, Dates Back...