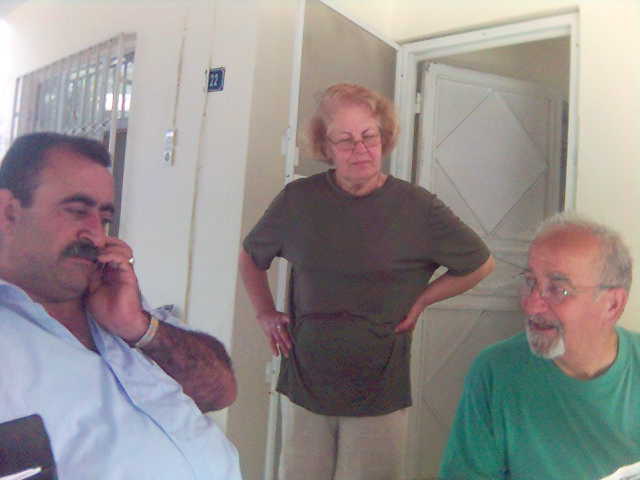 Vakifli Village, high on the slopes of Samandag, referred to as Musa Dagh by Armenians, is located 5 km from Samandag where around 150 people live, all Armenian Turks. Most have relatives abroad who often come during the summer months and enjoy the tranquillity of the village which is famous for its orchids where organic oranges and vegetables are grown and most shipped to European countries. It is a very historical village near Hidir, another village where a maple tree has been growing for over 1,500 years next to a spring. There is a newly built Armenian Church of the Holy Mother of God.

As we drove into Vakifli village from Samandag (Musa Dagh) on Tuesday, Oct 13, just a day before the Turkey – Armenia world cup soccer game, I noticed a man sitting on a bench who looked like the gentleman shown on the front page of local “Hatay Kent” newspaper. We stopped and showed him the newspaper. Sure enough, he was Canik Capar featured in the article together with Berc Kartun, the Mukhtar of Vakifli Village, the only Armenian village in Turkey. The newspaper article had a summary of the signing of the protocols in Zurich on October and expressed the hope of the Armenian villagers that the relations between the two countries will be normalized as envisioned in the protocols. In fact, reading most Turkish papers, it seems that the Armenian community in Turkey is fully supporting the normalization of relations between Turkey and Armenia and the Protocols. Most even stated that this should have happened long ago.

Canik Capar first took us to the Mukhtar’s house, but he was not there. His brother’s wife told us from the balcony that he was at the orchards but would come later. Then Canik invited us to his house and offered us a coffee. He told us that the house belonged to his father-in-law and that he was visiting Vakifli from Berlin with his wife. He said that his three children were all living in Berlin. When I asked him why he had gone to Germany in 1974, he told us his brief life story.

Canik Capar was born almost 70 years ago in Vakifli and was the Principal of a high school in 1974 when he was told that he could not be employed there anymore because he was an Armenian.  He was 35 at the time, had a wife and children and decided to leave his home village and Turkey and went to Berlin. He is now retired and spends a month and a half every year at his village. His father and mother still live in the village. As we visited the new Mayor of Samandag and walked around town, many people stopped us introduced themselves as Canik Bey’s students. It took him a while to remember some of them, but once he did, he hugged every one of them.

Canik Bey’s father-in-law came out to the porch with the help of a cane and after welcoming us, started telling us about his life. He said that he was born in 1914 and went to the mountains with all the people of Vakifli and six other villages nearby where only Armenians used to live. One day, he said, the officials gave everyone a sealed envelope, instructing them to open them only after the gendarme came. He told us someone did not obey and opened the envelopes and learned that it was the relocation order. That is why they decided to escape to the mountains. They took their families and livestock with them and tried to survive the hardship. Then the French offered to take them to Port said in Egypt and that is where they went and lived for four years before moving back to Vakifli. When the Hatay region became part of Syria under French occupation many Armenians returned but left after Hatay joined the Turkish republic except the people of Vakifli.

Franz Werfel, the Prague-born Jewish writer, wrote a novel about the resistance of the Armenians as it was told to him by a preacher, ”the Forty Days of Musa Dagh”. several people have challenged the authenticity of the novel which the author himself admitted was written without a true knowledge of the facts.

Canik bey briefly mentioned about the Armenian issues and stated that what matters most to them is the events surrounding the arrest of over 3,500 Armenians in Istanbul on April 24, 1915, not all the other matters. Then he went on telling us that those arrested were the top intellectuals, writers, musicians and that they were all killed. I told him that the number of arrests that we read is around 235 and most returned to their home. He admitted that Armenians in the eastern part of Anatolia revolted and many people were killed

Two Sides of A Mountain

There was not enough time to discuss the issues further as Canik Bey told us that he had to go to Samandag for his father’s haircut with a bus. I told him that I had to go to Samandag anyway for a meeting and that I could take him and his grandfather. They brought hand-picked oranges from their garden and we started reminiscing the old days.

On the way, Canik bey told us that between Oct 8 and 13 young Armenian and Turkish students had visited Vakifli under the Turkish – Armenian Civic Dialogue Project called “Two Sides of a Mountain.” The project is organized by the European Students Forum (AEGEE) to provide the means for a better understanding of the students of the two countries. A dinner was held on Saturday evening with the wine, apricots, dried plum and cognac brought from Armenia and bread and icli kofte from the village. This was followed by a showing of films about the two countries.

This is the type of projects that may take place more both in Turkey and Armenian if the protocols reach their goals.

PS. Photo of Canik capar, his wife and mother (at centre)

“Words Under the Lens Series”-#2: The latin word “FERRAMENTUM” sourced from Turkish.

BEAST ON THE MOON – A Hate Story in the form...