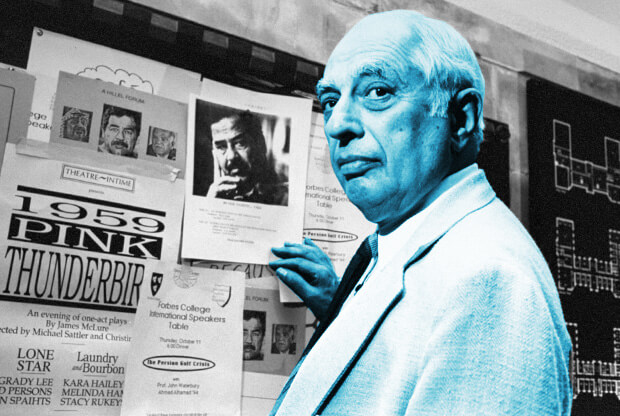 Recently, on occasion of the “Turkish Cultural Season” celebrations in France, the daily “Le Monde” published a series of interviews with the Armenians, all of which viciously attacking Turkey. An intense campaign in France against the Turkish history and heritage is underway. Unscrupulously, Le Monde has not made any attempt to bring some balance and sense to those outrageous pronouncements.

This brings to mind an interview conducted in 1993 by the same Le Monde with the eminent Turkish and the Middle East historian Bernard Lewis. In the aftermath of this interview, Mr Lewis was sued by the Armenian organizations on the grounds of denial the Armenian genocide, which the Armenians conveniently equate with the Holocaust. This preposterous court action yielded nothing. The Wall Street Journal and The Washington Post criticized France in their editorials. I found in my file an account of this episode which may serve as background information, and establish a history. I hope you will find of interest. Please read on.

AN INTERVIEW BY THE “LE MONDE” WITH BERNARD LEWIS
By: Ayhan Ozer

On November 16, 1993, the French daily conservative Le Monde published a long interview with the professor (now emeritus) Bernard Lewis of Princeton University on occasion of the publication of his latest book The Middle East. The main topic of the interview was the Islamic fundamentalism; however, given the pre-eminence of professor Lewis on the Ottoman and the Middle Eastern history, the interviewer touched upon the so-called “Armenian Genocide” as well.

Professor Lewis’s works have been translated in twenty-two languages. He has lectured in Europe, Asia, North Africa, and the United States, as well as in many Muslim countries. Below, is the English translation of the segment that deals with the Armenian issue.
*****
Le Monde — Why the Turks always refuse to admit the Armenian Genocide?
Bernard Lewis — You mean, the Armenian version of the history? There was an Armenian problem [during WW I] for the Turks created by the advance of the Russians, and also there was a population with the anti-Turkish sentiment in the Ottoman Empire who sought independence, and they overtly sympathized with the Russians advancing from Caucasia. Also, there were Armenian bands. The Armenians bragged about their heroic exploits in resistance, and the Turks had trouble to maintain order under the prevailing war conditions. For the Turks, it was necessary to take the punitive and preventive measures against a hostile population in a region threatened by the foreign invasion. For the Armenians, it was liberating their fictitious land. Both parties agree that the relocation was geographically limited; that is, those measures did not affect the Armenians who lived in the other parts of the Ottoman Empire. No one has any doubt that terrible events took place, the Armenians as well as the Turks suffered and perished in equal measure. Yet, no one will be able to tell precisely what the circumstances were like, and how many people died. Consider, for instance, the case of Lebanon [Beirut] that took place recently and in full view of the entire world.  During their [the Armenians] relocation to Syria [an Ottoman province at that time], hundred thousands of Armenians died on account of a famine, elements, marauding bandits and epidemics. However, when you brought up the question of “genocide”, you imply that there was a deliberate policy of extermination, to annihilate systematically the Armenian nation. This is very doubtful. The Turkish documents prove an action of relocation, not extermination.

Le Monde — Do the Turks accept what you say?

B. Lewis — It depends on what Turk you talk to. The authorities do not accept any genocide. Some Turks may give you an answer somewhat different.

***
In the aftermath of this interview, four lawsuits by the Armenian organizations were brought against Professor Lewis. They also summoned The International League Against Racism and Anti-Semitism as an expert witness. Their spokespersons found the opinions of professor Lewis (or, his legitimate doubts about the issue) objectionable, and they demanded of the court their suppression and due punishment for Mr Lewis. One of the four cases was a criminal action brought under the French Gayssot Law, the French equivalent of the “hate speech law“. Under this law, any attempt to deny crimes against humanity committed during World War II is a punishable crime. The court found that the Gayssot Law can not be applied to the Armenian case. In spirit and in a letter this law was strictly against the Holocaust deniers. For Americans, the Gayssot Law is an anathema as it violates our most cherished value, which is the freedom of speech.  How such a medieval law can be enacted in a supposedly progressive country like France? It is beyond imagination.

The verdict in this criminal case was announced on November 19, 1994, and the case was dismissed. As for the other three civil actions brought under the clauses of the French Civil Code, the court converted them to a tort; meaning to aggrieve someone but not acting against the interests of the public as a whole, to cause distress to an individual or group. The verdicts in the three civil cases were announced on March 1, 1995; June 21, 1995; and July 12, 1995. In two of the civil actions, the plaintiffs were represented by Tremolet de Villiers, a lawyer well known for his keen interests in Holocaust cases.

Two of the civil actions were also dismissed by the courts, and the plaintiff parties were ordered to make contributions to the defendant’s (professor Lewis) costs. In the third civil action, the court ruled that “in no way it was established” that  professor Lewis had “pursued a purpose alien to his mission as a historian,”
-3-

yet, he was found at fault in not having cited, in the course of the interview, “elements contrary to his thesis” and thus had “revived the pain of the Armenian community.” For this offence (!) professor Lewis was ordered to pay 1 French Franc (25 cents!) in damages to each of the two plaintiff parties as well as contributing to their costs. It is noteworthy to add that, while these proceedings were in progress, professor Lewis was honoured by being elected a Correspondent Member of the Institut de France.

These bizarre court actions in France touched off some reactions from prominent newspapers in this country, such as the Wall Street Journal and the Washington Post. The Wall Street Journal dedicated an editorial to this issue on August 28, 1995, under the heading of  “A Franc for Your Thoughts.”  The Editorial said that “The whole controversy was dragged into court, indeed, by-laws intended to silence nuts denying that Hitler exterminated all the Jews and that the gas chambers never existed. When asked whether or not the same logic could be applied to the Armenians, the court refused to get involved in the arbitration and deciding about polemics on controversies triggered by events of history, and then proceeded to do precisely that! A court applying the Holocaust-denial precedent to a bonafide expert taking one side of a bonafide controversy shows how quickly restrictions on speech can spread. It also serves to obscure why France and Germany needed to enact such laws in the first place.”

The Washington Post editorial on the same subject dated September 9, 1995, wrote that “A law court in Paris found the distinguished historian Bernard Lewis guilty of expressing doubts that the massacres of 1.5 million Armenians early in this century by the Ottoman Empire could be correctly termed a genocide… Amazingly, the court found professor Lewis guilty for this offence while at the same time declining to rule on whether his opinion as expressed was right or wrong. When a court is willing to punish a scholar for expressing an ‘insulting’ opinion on a historical matter, even when the debate on the point in question has been raging worldwide for years, the absurdity and the perniciousness of such laws is on full display. Once a court or a disciplinary body can be enlisted in lieu of argument to silence an unpopular viewpoint, all manner of trouble can and will result.”

It did indeed. The whole episode is a desperate attempt by the Armenians to silence the eminent historians through intimidation and threat of lawsuits. Taking cover behind the law protecting the Holocaust against assaults, the Armenians enjoy an undeserved immunity from the scholarly scrutiny of their case.

BEAST ON THE MOON – A Hate Story in the form of a Play...