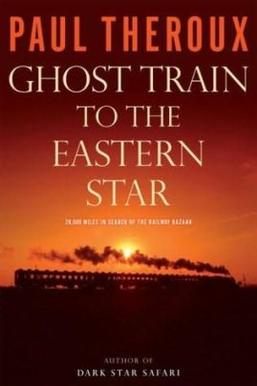 I read the first 5 sections of your new book while stuck at home during the worst rainstorm that hit Istanbul, the town that you have written about and seem to like very much. It is a very interesting book like many that you have written before, including the Great Railway Bazaar which is re-created in the new book with additional comments. I had read Great Railway Bazaar in 1988 while working in Atlanta, Georgia, more than 21 years ago and will keep referring to it as I read the “Ghost Train” which may take some time… However, I would like to point out several issues with your book now, which are quite bothersome and puts you in the same category of authors who tell only one side of the stories.

The first of thirty-two chapters of “Ghost Train” is on the Eurostar and the second chapter on the Orient Express, which incidentally was in Istanbul just last week, despite the rumours that it will be discontinued. In Chapter Three, the Ferry to Besiktas, you write about Orhan Pamuk and refer to his book “Istanbul” and his comments on the Armenians and the Kurds. Then on page 43, you make the following statement:

“The massacre of Armenians a century ago, the later expulsion of Greeks, and the Kurdish outrages and Turkish reprisals are lamentable facts of Turkish history; still, no city in Asia is so self-consciously reform-minded.”

First, dear Paul, don’t you think you should have also mentioned the Armenian rebellions and uprisings all over eastern Anatolia and the massacre of Turks by the Armenians which resulted in the death of Armenians as well when many Armenians revolted against their government with the support of the British Empire, the French the Russians and others. I would recommend you to watch a documentary called “Revolt” that will show you the other side of the Story. The Greeks invaded Anatolia in 1919 and the Greeks of Anatolia joined the Greek army in the devastation of cities and the massacre of Turks across western Anatolia which resulted in the population exchange of Greeks, not expulsions. I am sure you are aware of the thousands of killings by the Kurdish terrorists since 1984 which took the lives of 7 soldiers just two days ago.

In the following paragraph you state:

“This (Istanbul) is the most easily negotiated and hospitable cities in the world makes me a mild Turkophile”.

Well, why then don’t you tell the truth about the Armenian, Greek and Kurdish issues. Are you afraid that your book will not sell or censored by the well-oiled Armenian and Greek diaspora in America?

In the next chapter 4, “Night Train to Ankara” you write about your encounter with Prof. Talat Halman, the Culture man of Turkey. I am glad you have enlightened on some aspects of Turkish issues thanks to Prof. Halman.

It is a pity that you had to take a bus from Ankara to Trabzon instead of taking a train from Ankara to Erzurum and bus on to Trabzon. This trip in train carriages made in Turkey (which you do not mention in your book) would have given you a chance to stop in Sivas where Ataturk held a conference on September 4, 1919, during his incredible trip from Samsun to Ankara which lay the foundation of the Turkish Republic. A visit to Ataturk’s Mausoleum in Ankara would have also helped you to really understand Turkey, which you have not mentioned in your book, a monument like no other in the world.  You mention Elif Safak with affection and state that you had her book with you during the journey, which is fine. I read many of her books, including “Baba ve Pic”, which I did not care for and wrote to her about it. But how about Merry Lee Settle’s “Turkish Reflections”, a book that every traveller to Turkey should read. Also, “The Birds Without Wings” by Lous Bergier which tells the story of the Greeks and Armenians in turkey truthfully. Of course the book by Gazi Mustafa Kemal Ataturk himself, “Nutuk – The Speech.” If you had read these books, you would not have made the statement on page 43.

In a review of your book, “Riding the Iron Rooster”, Mark Salzman wrote on June 19, 1988, that, although you saw every corner of the country (China), apparently didn’t make any Chinese friends. Having read many of your books (27 fiction and 14 nonfiction – book of criticism on V.S. Naiapul is something else altogether), I can also state that you have made friends with the wrong people in Turkey except for Prof. Emel Dogramaci of Cankaya University and Prof. Talat Halman of Bilkent University, one of my and many Turk’s hero.

I hope you will consider revising the above paragraph because they do not tell the whole story and come and stay longer to really understand this nation of Turks better.

Words Under The Lens: “ACKNOWLEDGEMENT”, “ADMISSION”, “CONFESSION” and Other Related Latin And Greek Words