Home General Articles Culture Words under the lens: About the word “KAVAL” meaning “horse” and its... 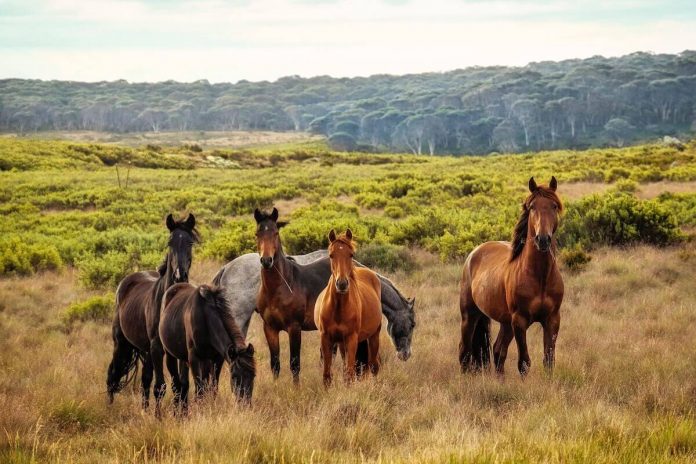 A friend asked the meaning of the word KAVAL in Turkish.  To this, my first response was that it meant “flute” in Turkish. But when she explained that it was the Indo-European word KAVAL meaning “horse” and what was my view about it, then, the story was changed completely and my view of this word and some other related words makes up the paper below.

First, we must note that although words may look alike in format does not necessarily mean that they are related to each other or one is derived from the other or both are coming from the same “root” word. The important linguistic element that determines the identity of a word is the meaning that has been assigned to it. Any comparison of two words that look alike must be examined together with their meanings in order to make any judgment about their linguistic relations.

There seems to be a number of forms of this so-called “Indo-European” (IE) word “KAVAL” meaning “horse” such as:

Latin “caballus“, Italian “cavallo” and sometimes  “caval“,  French “cheval“, etc. The speakers of such languages naturally think that this word is one of the original words of their languages which they speak from childhood onwards.  Of course, this assumption is natural for them, as they do not study to learn how the words of their languages were made up.  Most people do not stop to think about such matters. However one expects that at least some of the linguists would study such matters.  I have done such study intensively and I will now explain the nature of the makeup of this word “kaval, Cavallo, caballlus, cheval“.

Actually, these IE words that mean “horse” have their meaning taken from another word known as “AT” in Turkish meaning “horse“.  At this popint I can hear the the “no!, not so!” objections from the readers. But let me explaine.  This is so well camouflaged that the term AT is not even visible anymore in most IE words related to “KAVAL”in IE languages. However, we still have a few related words that give away their secrets. Some of them are:  French “chevalet, chevalement, chevaleresquement”, Italian “cavalcata, cavaletta”. Let us examine the following “horse” related words.
1. There is the French word CHEVALET which means “a horse, a horse like supporting stand.  Origin: 1800–10;  any wooden frame for holding or supporting something, equivalent to cheval  horse (< Latin caballus ) + -et -et;  compare parallel sense of horse“.  A similar French word is the word CHEVALEMENT which means “cheval, chevalerie”.

The French word CHEVAL is just the cut off front end of the larger term CHEVALEMENT giving the false impression that “cheval” is the root of the word which in fact it is not!  We must note that the “horse” concept has been taken from Turkish AT and then, allocated to CHEVAL in this construction.  This is concept stealing linguistic trick used to transfer the meaning of a word of another language and giving it to a newly concocted word.  Of course, in the process of fabrication of  the word CHEVALEMENT, the concept “domesticated” (tamed) expressed by the Turkish words  “MEN EVCIL” disappeared altogether while it gave its verbal body to the newly fabricated word “CHEVAL” at the same time the meaning “horse” of the Turkish word “AT” was transferred to “CHEVAL“.

This is a linguistic version of the “three shell game” played by those with a fast hand trick.
We must also note that a monosyllable word AT meaning “horse” taken from the monosyllabic language of Turkish cannot be hidden readily.  The only alteration that a linguist can do to it is just reverse it to the form of TA in which the meaning “horse” would still be visible.  The only way to hide the stealing is to wrap the term AT with some other Turkish words.  Linguistically, wrapping one word with another one or more words makes the altering and restructuring and hiding of the Turkish phrases much easier and thus, the resulting fabricated word becomes readily alienated, Aryanized, Indo-Europeanized and not recognizable as Turkish anymore.  In this restructuring, the term “MEN EVCIL”  in the Turkish expression “MEN EVCIL AT” is the linguistic wrapping part in order to hide away the Turkish word ‘AT’ meaning “horse”.

And that is the trick that the makers of the so-called “Indo-European” languages used in fabricating countless number of words from Turkish language.  After all stealing Turkish words and phrases was not like stealing physical valuables of people.  When Turkish words and phrases are stolen and used to make up IE words, no one notices since there is no missing word in Turkish. This invisibility makes the thief quite happy and at ease!

We must also note that one can ride only on the back of the “domesticated “, that is, the “tamed” horse only”.  No self-respecting wild horse will let a joker ride on its back!

In this Turkish expression, Turkish word MEN means “I, I am”, EVCİL means “domesticated, tamed” and AT means “horse”,  ASKER means “soldier”, ASKERİ means “the soldier”.

In the French alteration and restructuring of this Turkish expression into CHEVALERESQUEMENT, the meaning of the Turkish has been redistributed among different parts of the new French word such that the front part CHEVAL gets the meaning of “horse”, and the part CHEVALERESQUE becomes the “horse-soldier”.  The remainder of the Turkish souce text forms the rest of the newly fabricated word CHEVALERESQUEMENT. In this way this newly fabricated word gets an alien Frenchise form with a complete meaning associeted with it, but all of has been taken from Turkish without anyone knowing about it.

3.   Curiously, this French word CHEVALERESQUE, meaning “chivalrous, knightly, like a knight, like a horseman-soldier”, has another relevant Turkish word hidden in its form.  We see it as follows:

The French word CHEVALERESQUE, when rearranged letter-by-letter as “SUVARECELEQ-EH”, I find that this so-called French word CHEVALERESQUE has also the Turkish expression “SÜVARİCİLİK” meaning “the profession of cavalry, the profession of knighthod”. This is again a correspondence which agrees totally meaning as well.  This indicates the power of durability of the Turkish language showing that no matter how its words and expressions are confused and restructured into other formats, it will retain its original intended meanings in Turkish within the new format. And they can be recovered back into Turkish if the meanings of the newly fabricated word is given.

4.   There is the Italian word “CAVALCATA” meaning “riding on horseback” as if there is another part of a horse that one can ride.  When this word CAVALCATA is rearranged letter-by-letter as “AVCAL-ATC”, we find that it is the altered and restructured and renamed form of the of the Turkish expression ” EVCIL ATCı” meaning  “domesticated horse rider” (tamed horse rider) where Turkish word “EVCIL” means “domesticated, tamed”, “AT” means “horse” and ATCI means “horse rider; horse owner”.

But we must note that in this fabrication of a word from Turkish, the newly built word CAVALCATA has been renamed as meaning “riding on horseback” where the word CAVAL is presented with the false impression as if it is the word that gives the meaning “horse” to the word “CAVALCATA” and the rest is just some addition that makes the word to mean “riding on horseback”.  Yet no one knows the fact that this word CAVAL (KAVAL) has taken its meaning from Turkish word AT!

With these analyses given above, we have shown that the term French word CHEVAL and the Italian word CAVAL (KAVAL) get their meaning of “horse” from Turkish “AT“.
5.  There is the Italian expression CAVALLO DA CORSA meaning “race horse”.
The expression CAVALLO DA CORSA, rearranged as “AL-ARACLO-COSV-AD”, the altered and restructured form of the Turkish expression “AL ARAÇLU KOŞU ATI” meaning “race horse with red chariot”.

Again, we have all elements of the decipherment in Turkish defined and shown how the Italian expression CAVALLO DA CORSA means “race horse”.

6.   The latin word CABALLUS or CABALLI also means “horse“ö but we see that the letter T representıng the Turkısh word AT has been dropped for further camouflage. In this regard we have the following Latin word to analyse.

Although, I did not find it in dictionaries, I believe that in the Latin language, there must have been a word in the form of CABALLITER which would be equivalent to the Latin word EQUESTER meaning “equestrian, mounted on horse; horseman, cavalry”.  This word would also be similar to the Latin word CABALLARIUS meaning “a military man serving on horseback, horseman, rider”.

With this background information, when the term “CABALLITER“, meaning “horseman, horse soldier, rider“, is rearranged letter-by-letter as “EBCIL-ATLA-R”, we find that it is the altered and restructured and renamed form of the of the Turkish expression ” EVCIL ATLI eR” meaning  “domesticated horse rider man” (tamed-horse rider, tamed-horse soldier).  This would also explain the Latin word CABALLARIUS,  although the Turkish word AT has been dropped from it.

So again we are witnessing rearrangement of a Turkish expresion into a so-called Latin word that did not exist before the rearrangement of this Turkish expression; and furtheremore, it usurped the Turkish words AT and ASKER and their meanings to come up with the word EQUESTER meaning “horse soldier”.  Any linguist will see that this is pure act of usurpation from Turkish language in concocting artificial languages and claiming them as if they were genuine languages!

8.   Similarly, the English word EQUESTRIAN is from Turkish expression “AT-ESQERAN-U” (AT ASKERLERI O” meaning “it is horse soldiers”.

9.   The Greek term KATAPHRAKTOS means “armored cavalry”.
http://en.wikipedia.org/wiki/Cataphract
“A cataphract was a form of armored heavy cavalry utilised in ancient warfare by a number of peoples in Western Eurasia and the Eurasian Steppe.
The word in English is derived from the Greek: κατάφρακτος Kataphraktos (plural: κατάφρακτοι Kataphraktoi), literally meaning “armored” or “completely enclosed”. Historically the cataphract was a very heavily armored horseman, with both the rider and steed draped from head-to-toe in scale armor, while typically wielding a kontos or lance as their weapon.”

With this background information, the Greek word KATAPHRAKTOS, meaning “heavy cavalry”, has an important message to tell us!

When the Greek word KATAPHRAKTOS, rearranged letter-by-letter as “TORK-AT-ASKAPH” where symbol P is also Greek letter “R”, we find that the Greek word KATAPHRAKTOS is an altered, restructured and Hellenized form of the Turkish expression “TÜRK AT ASKARİ” (TÜRK AT ASKERİ, TÜRK SÜVARİ)  meaning “Turk Horse soldier” or “The Turkish Cavalry”. It is well known fact that “Turk Horse Soldiers” were the rulers of all steppes in the Western Eurasia and the Eurasian Steppes (Asia and Europe put together) in the ancient world. Ancient Greeks, as they did in every aspect of their Greek “civilization” including their language, took everything from the ancient Turanian Tur/Turk/Oguz peoples, altered and claimed as their own.  In this case, evidently they also took the “Turk Horse Soldiers” (The Turkish Cavalry) as their model, and armored their own horse soldiers heavily and called it KATAPHRAKTOS!

With this, I end this study about the KAVAL (CHEVAL) and their variations.
With best wishes to all,