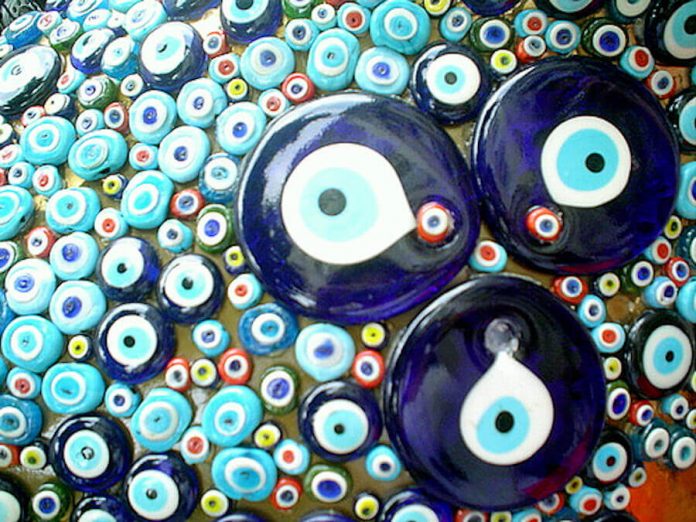 Evil Eye is a strong belief in many cultures; in the Middle East, North Africa, India, and even in some Slavic countries people are conscious of this phenomenon. This belief attributes a supernatural potency to the glance of certain people; they presume an occult power with an intense magnetism in their eyes does have the ability to cause misfortune, such as injury, freak accidents, disease or even death to those on whom it falls. The folk tales in some countries relate bizarre episodes about it. Children and animals are said to be particularly susceptible to the evil eye.

How did this belief come about? In ancient societies it was widely believed that a cosmic belt that carried supernatural forces surrounded the Earth, and some human beings were unknowingly in tune with that force which reflected in their eyes, supposedly causing unintentional harm to other people.

Belief in the evil eye is ancient, and it goes back to preliterate pagan societies; however, it has persisted throughout the world into modern times. In our time, almost all the traditions, Christianity, Judaism, Islam, Hinduism and Buddhism have references to it. In some countries, the strangers, the crippled, the lame individuals, and old women are most accused of casting an evil eye. Envy or jealousy of someone else’s prosperity or beauty, yearning intensely for the good fortune of other people, as well as the malice,  are thought to be the cause.  It is believed that if a person is admired and loved by others the evil eye may strike that person. Even plants, house pets, and homes are not immune from the evil eye. In medieval Europe, it was considered unlucky to be praised or to have one’s possessions admired. Even today, this superstition exists in many parts of the world. In some countries, the newly born babies are kept apart from the visitors for 40 days to avoid the evil eyes. To ward off the harmful glances, people are expected to utter qualifying phrases such as “God bless it” or “Mashallah” (Marvellous, Wonderful), thus they mollify their admiration. Among some Asian and African people the evil eye is particularly dreaded while eating and drinking because the soul is thought to be more vulnerable when the mouth is open; therefore eating is either a solitary activity or takes place only with the immediate family and behind locked doors.

The power of the evil eye sometimes reaches unimaginable dimensions. A Slavic folktale, for example, relates the story of a father who was believed possessing the evil eye. He blinded himself in order to avoid injuring his own children.

Measures taken to avert the evil eye may vary among cultures. Wearing amulets, charms  (Nazarlık), talisman; or, to display ritual drawings or objects are the most commons. Also, such items as a horse shoe, baby shoe, and garlic are displayed at homes. In Turkey, the charms made of blue stone that depict a picture of an eye can be worn by the children on their shoulders or on the necks, or attached on a crib. Also, a strong-scented perennial woody herb called “Rue” is burned to dispel the bad souls (Tütsü in Turkish).

Once a person is believed to be stricken by the evil eye, there are remedies to break or dispel it. It is believed that those reliefs can free a person from the mental and the spiritual bondage that may be tormenting him or her. Those cures are primitive in nature, and without any rational basis. The most common practice is having a holy man read verses from Qur’an and then blow out gently to the face of the stricken.

A person “who has been touched by the evil eye” can also be exorcised by a wise man to drive out the evil spirit. An ancient practice called “Pouring (molten) Lead” is believed to be a panacea. To perform this ritual, the subject person is covered with a blanket for protection from scattering lead fragments. About half a pound of lead is melted in a receptacle, then it is brought gently above the head of the subject person, and dumped into cold water in a large and deep container. This permits the lead to take its shape freely while it solidifies. In contact with the cold water, the hot liquid lead gives off a sharp and explosive sound, and takes immediately an odd shape with several outstretched spikes; which signify, so it is believed, the evil is broken or dispelled.

As for the amulets. They are also called “Talisman”, an object either natural or man-made, believed to be endowed with special powers to protect or to bring good fortune. Amulets are carried on the person, or put in critical places around the house. They are made of precious stones, metals, teeth, horn, or claws of animals. Among believers, the amulets are thought to derive power from their connection with natural forces or from religious associations.

The Christian amulets include the traditional relics of saints and letters which are said to have been sent from heaven. The crosses or crucifixes, and statuettes of the Madonna are also very popular. Among Jews, the preparation of amulets is a rabbinic function. Muslims often carry on their person’s verses from the Qur’an, or the names of God, or associated sacred numbers carefully wrapped in a small satchel.

"You Asked For TURKISH Traces" By Dr. Polat Kaya (Copyright ©...