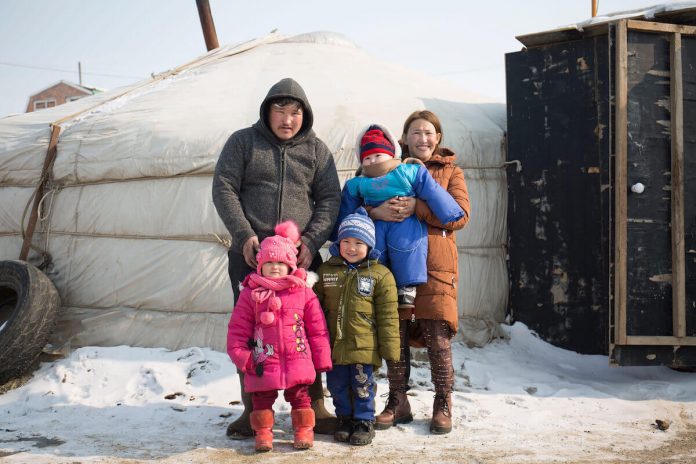 A two day conference was held in Ulaanbaatar on Aug 25 – 27, 2011 on Global Peace Leadership as part of the 5th “Convention of World Mongolians” and “Global Peace Festival.” The title of the conference was “Mongolia and Northeast Asia Peace.” Several other events also took place during and after the conference, including the celebration of the 2,220th anniversary of the founding of the first Hun Empire in Mongolia, also referred to as the Mongol Empire. An exhibition, “Global Peace Festival of Hun Origin People” was held at the National Museum, followed by a fashion show and concert. The world’s tallest monument, Chinggis Khan Monument, was visited during a trip to the 13th century tourist attractions. The participants at the International Youth Convention and Cultural Exchange which was also held in Mongolia took part in the final session of the Conference and the Festival.
Global Peace Foundation Festival is hosted by Global Peace Festival Foundation, a non profit international civil organization established in 2007, with headquarters near WDC. The Foundation has branches in 23 countries, but not in Turkey. Among the main activities are stated to be “Support for developing countries to become independent, carrying on continuous activities for world development based on the UN Millennium Development Goals.” Global Peace Festival (GPF) claims providing an opportunity where all mankind can share the vision of “One Family Under God” through strong social cohesion.
Mongolia is a landlocked country in East and Central Asia, between Russian Federation in the north and People’s Republic of China to the south, east and west, with a population of around 2.75 million. Ulaanbaatar, the capital and largest city, is home to about 45% of the population. The country was under the rule of Chinese for many years until 1911 when Mongolia declared its independence from the Chinese but became an independent state in 1924 following re-occupation by the Chinese and the Russians. Over 90 % of the population are Buddhists. Mongolia’s political system is a parliamentary republic. Tsakhiagiin Elbegdorj is the President and Sukhbaataryn Batbold, the Prime Minister.

The Lonely Planet book on Mongolia states that “over the past 2000 years, probably no other place on the planet has exported as much history as Mongolia. In three dramatic waves – Hun, Turk and finally Mongol – hordes of warriors rode their small but powerful horses down from the Mongolian Plateau to challenge and transform the world.” The four day convention and the festival were all about the Mongols and the Huns but very little about the Turks although there are hundreds of monuments in Mongolia erected by the Turks during the 6th– 8th centuries, AD.

During the reign of Chinggis Han (Cengiz Han in  Turkish) in the 13th century, the empire spread from the central Asia to Anatolia in present day Turkiye. It was the biggest empire at the time and Mongolians from central Asia spread all over the world, protecting their newly conquered territories. However, after the fall of the great Mongolian Empire, some of the Mongolians never came back. They stayed in today’s Russia, Pakistan, Afghanistan, India and other places. Today, most of the Mongolians in the diaspora, according to the organizers, get together through the “Convention of World Mongolians” which began in 2006 on the 800th anniversary of the founding of the Mongolian Empire in 1206.

Opening Ceremony and Photo Exhibition: “To all hearts for Mongolia”, August 25

The opening ceremony for the Conference was held at the Art Gallery of the National Museum where photographs of Cengiz Han Park in Ankara and other places in Turkey were also included in the exhibition. There were short performances by Mongolian artists followed by opening remarks by Secretary General of “Convention of World Mongolians”, Amb. D. Tsakhilgaan and other dignitaries.

General Session of the “Convention of World Mongolians”, August 26

The convention, commemorating the 100th anniversary of the contemporary diplomatic service in Mongolia, was held at the Ministry of Foreign Affairs and Trade. There were many representatives from 33 countries, including two from Turkey. Several concurrent sessions took place, including 2 Parliamentary Roundtables, Mongolia and Northeast Asia Peace, Cooperation on Energy, Transportation and Natural Resources, Empowerment of Civil Society Through Social Entrepreneurship, Volunteering and Community-Driven Development, Role of Business Community, Family as a Foundation of Peace, and Role of Young Leaders in 21st Century Peace Building. There were many prominent speakers from around the world including Dr. Hyun Jin Moon, originally from Korea, who spoke about his adopted home America.

The second day conference started with a wreath-laying Ceremony at Chinggis Khaan and Sukhbaatar monument in front of the parliament building (Attachment 1.) Following a summary of the previous day’s presentations by the moderators of the sessions, the Ulaanbaatar Declaration was adopted by the convention. This was followed by a visit to “Chinggis Khan” Exhibition at the National Museum.

In the evening, the huge square in front of the Parliament building hosted all the conference members and thousands of Mongolians to watch cultural and artistic performances by both Mongolian and foreign groups. There were speeches by Mongolian government officials and convention organizers and a tribute to those who made donations for the ongoing projects in Mongolia. The members of the youth group sang several songs including, “We are family under God”, reminiscent of the “We are the World” song of previous years.

The following morning, the conference attendees left the hotels early in the morning to visit the Tsonjin boldog, 13th century tourist centre, and the Chinggis Khaan Monument located in the middle of a large prairie. With its height of 131 feet, the stainless steel monument was stated to be the largest monument of its kind in the world. There is a museum that telss the story of the Mongolian Empire and probably the largest boot, replica of the boot that is claimed to be worn by Chinngis Khna.

Mongolia is gaining importance in the world as a country with abundant minerals, coal and gold and her friendly people. Many companies from the US, Europe and Asia are in Mongolia, exploring for these minerals. Just before, during and after the Convention, Mongolia was visited by the US Vice President Biden, South Korean President and companies such as Macmahon who has won contracts for mining operations in South Gobi region, were in Mongolia.  The two English newspapers, The UB Post and Mongolian Times, reported that both the US and South Korea are looking for nuclear waste burial sites, which sparked a debate in Mongolia.

Newspapers reported that Mongolia has expressed desire to host Olympic Games 2040. As reported earlier, Turkey has applied to the committee for the Olympic Games 2020.
During our primary school years in the 50s, the history books taught us that Turks came to Anatolia in the 11th century from Central Asia. We were also taught that Cengiz Han was a Turk who is included in Ibrahim Alaeddin Govsa’s book, “50 Great Turks” published by Yedigun Nesriyati in the 50s. In fact, 5 of the 16 states identified on the Turkish Presidential Seal, are various Hun origin nations. In December 2006, an exhibition on Cengiz Han was held at the Sabanci Museum in Istanbul (2). When Ambassador D. Tsakhilgan, Secretary General for “Convention of World Mongolians”, announced that the Conference would be held in August during the Eurasia Conference in Istanbul, I decided to travel to Mongolia and also visit the “Turkish sites” located all over the country. There is an Ataturk high school in  Ulaanbaatar with a bust of Ataturk in front (Attachment 2), and a park dedicated to the Turkish-Mongolian friendship in the centre of the city (Attachment 3.)

Although the conference covered “Northeast Asia Peace”, there was no mention of the national existence and cultural struggles of Turkistan in China and other Moslem Eastern Turks. The northeast Asia countries include Mongolia, Russia, China, both North and South Korea, Japan, and the United States.

Following the trip to the countryside, I went to the park near the Parliament identified as “Turkish Mongolian Friendship Park”. It is a beautiful park with many statues including a Turkish flag, unfortunately with chipped corners of the star. When the park was opened in 2009 with the cooperation of the Turkish and Mongolian Governments and TIKA , a statue of a “Grey Wolf” was also placed on a pedestal, which unfortunately was not there. However, a trip to Otuken near the Orhun river where monuments to Turkish rulers such as Bilge Khan was not possible. Replicas of these famous monuments are included in National Museum’s special section on the Turkish period, 6th to 8th centuries AD.

There are many libraries and museums in Ulaanbaatar. We had a chance to visit the National Library located in central Ulaanbaatar. According to the chief librarian, the has over 30 million books. There is a special section on Turkish books with a photograph of Ataturk at the entrance. A museum inside the library complex includes many hand written books, including a letter that Kubilay Han sent to the Chinese in 1206. Many rare books are being kept wrapped in fine silk clothes.

It was announced that this year, “Global Peace Convention will be held Korea 2011”, with the theme of  “Unification of Korean Peninsula for North East Asia Peace.” Nov 28-30, 2011.

The second participant from Turkey, a businessman from Bursa, after discussions with the organizers, made an announcement during the final luncheon in a Ger that next year’s Global Peace Festival will be held in Bursa, Turkey, with exact dates to be determined later. This of course will require approval by the Turkish Government and authorization from the Turkish Minister of Foreign Affairs and Finance. Unfortunately there was no one from the Turkish Embassy during the four day convention and festival to discuss this with. The American ambassador attended to almost all of the functions and a US Congressman was among the speakers. I trust the Turkish government and the private sector will support the announced convention to take place in Bursa next year.

Notes:
(1) Other notable large monuments are the Five US President monument at Mt Rushmore, Ataturk monument in Buca Izmir.
(2) Exhibition on Cengiz Han and His Heirs – The Grand Empire of the Mongols, 800th Anniversary. An article on this exhibition is given below.
(3)  Turks: Children of the Wolf Mother

The Lonely Planet book on Mongolia tells the story of the Turks as descendants from a boy who was left for dead but saved and adopted by a mother wolf who raised him and than mated wit him, creating from their offspring the ancestors of various steppe clans. Along the Orkhon Gol in central Mongolia they built their small cities of mud, the most famous of which were erected during the time of the Uighurs, the last of the great Turkic Empires of Mongolia. The Turkic ear reached its zenith in the early 8th century AD under Bilge Khan and his brother Kultegen, the military general. Thir monuments near the Orkhon Gol are probably the oldest known examples of writing in a Turkic language.