12th International Golden Safran Documentary Film Festival, 16 – 17 – 18 September, 2011
The very first festival in Safranbolu was held in 1975, called “Safranbolu Cultural and Folk Music Festival.” Mr. Kiziltan Ulukavak was the Mayor who was instrumental not only organizing the Festival but also paving the way for Safranbolu to becoming one of 10 UNESCO Heritage Sites (1) in 1994. As visitors walk or drive from Kirankoy to Carci districts, they are greeted with a large sign and the logo declaring that Safranbolu is on the List of over 800 Heritage Sites around the world.
In 1999, “International Golden Safran Documentary Film Festival” replaced the original festival, adding “Photography Exhibition” and folk dances from various countries. The 12th Festival began with a parade in Koyici district following a TRT 1 interview with the Mayor of Safranbolu Necati Aksoy and the representatives of the participating groups from Greece, Bulgaria, Tataristan, and Artvin, Turkey.  The Parade ended at the Misaki Milli Square adorned with a beautiful monument created by the late Sculptor. The protocol included the former Presindet of the Turkish National Assembly and Karabuk Parlimentaria Mehmet Ali Sahin, Governor of Karabuk Izzettin Kucuk, Governor of Safranbolu Gokhan Ozcan and other dignitaries.
Many documentary films were shown, including “Highlands of Karadeniz” on the lives of people who live alone high on mountains. Awards were given to the winners of the documentary films. Four photography exhibitions  were held including one created by Prof. Husamettin Kocan of Okan University in Istanbul at the Safranbolu Historical Museum. There were also several presentations on the life of Tahir Karauguz, a famous lawyer from Safranbolu, told by his son Dogu Karaoguz.
However, the air of the historic town was polluted with the smoke and odor coming from the Municipal open waste dump just outside the city. When this was brought to the attention of the Mayor, we were told that the wild storage would be closed and moved to a sanitary landfill outside of Karabuk, the city with the large iron and steel mill built in 1937 during Ataturk time.
As stated in the article on the 6th Festival below, Safranbolu is a cultural treasure which is being protected for passing it to future generations where life continues and festivals such as the one that took place this weekend makes it a worthwhile place for visitors from all over Turkey and other countries to come and enjoy..
Yuksel Oktay, PE
22 september 2011
6th International Golden Safran Documentary Film Festival
9 – 11 September, 2005 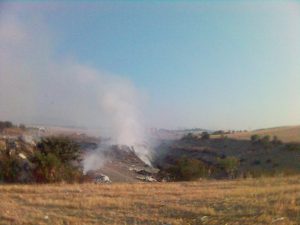