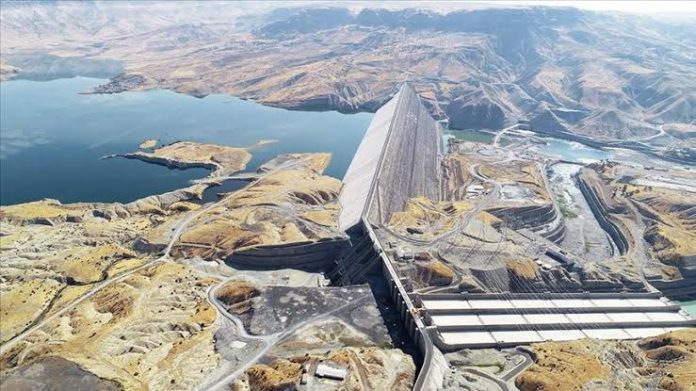 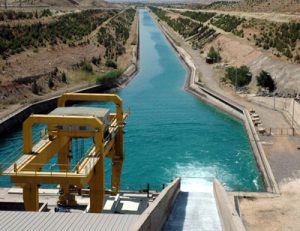 A groundbreaking ceremony was held on August 5th at Ilisu, a small village along the Dicle (Tigris) river where a large dam is to be constructed soon. The Prime Minister, who only two years ago had promised the local people that he would not allow the building of this dam, was the main speaker, along with the Minister of Energy Dr. Hilmi Guler, the Director of DSI, Mr Veysel Eroglu, and other dignitaries. However, several local representatives believe that the design must be altered in order to save the historic town of Hasankeyf (some refer to it as the city of knowledge seeker) and many  NGOs and individuals believe that this is one project that Turkey can not afford to be built for many reasons. The project, which is a part of the Southeastern Anatolia Project (GAP) and, understudy ever since the State Hydraulics Works (DSI) was established in 1954, will inundate 199 settlement areas, including the 12,000-year-old town of Hasankeyf, forcing the relocation of close to 44,000 people. Several bridges and stretches of roads, railways, transmission lines will have to be relocated. This is outlined in the preliminary Impact Assesment Report, which calls for many more detailed studies, and yet the project was given the green light, even without firm committed financial resources, a must before mobilization (1). 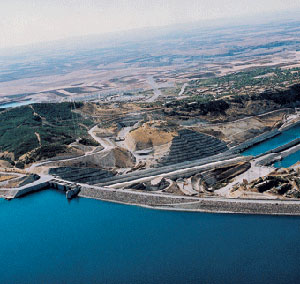 In 1929, Ataturk, who saw the need for the development of hydroelectric power in Turkey, made the following statement: ‘’It is imperative that the technical competence and capacity of the General Directorate of State Hydraulics Works, which is one of the main measures taken for our economy, be firmly established.’’ Ataturk visited many sites around Turkey, including the first dam built during the Republican era, Cubuk Baraji near Ankara, and in 1936 ordered the commencement of studies on the Firat River basin (2). However, if Ataturk was alive today, he certainly would not be in favor of building a series of dams on Munzur or Coruh which will, when completed, eliminate the rivers. It is nice to have and watch lakes and grow fish in them, but there is nothing in the world that makes human beings, and wildlife too, happier than running water.

The Ilısu project, which is a part of the GAP and a must for the construction of several other dams and HEPPs on Dicle, has been dormant since 2001 following the withdrawal of several financing and construction companies involved in its development. Now a Turkish-led consortium of German, Swiss and Austrian companies have taken over the project. When completed, it will be the fourth largest hydroelectric power plant in installed capacity (1,200MW) and generation of electricity (3.833 billion kWh). The total cost of the project is estimated to be around 1.5 billion USD, including the expropriation and resettlement costs of around $927 million, but excluding the financing cost.

During the financial arrangement period, DSI should look at alternative designs, such as proposed by a father and son team, Prof. Dr Ilyas Yilmazer of 100nci Yil University in Van and Ozgur Yilmazer, eliminating the Ilısu dam and using penstocks to convey the water to the powerhouse. Another design recommends lowering the height of the Ilısu dam by 31 meters thus, completely saving the town, which is being advocated by the Parliament Deputy from Mardin, Muharrem Dogan, as well, who claims that the design proposed is the 1958 version, which is hard to believe.

Hasankeyf, NGOs are Urging action to Save the  Town

Before the groundbreaking ceremonies, civil groups in the southeast protested the project which will flood the 12,000-year-old Hasankeyf and many towns and villages. One of the civil groups is the ‘’Initiative to Protect Hasankeyf Committee’’ and represents civil society groups, local administrators, bar associations, municipalities and chambers of engineering associations with a call to everyone interested in nature, cultural heritage and history. Another organization is the ‘’Nature Society’’ which has identified Ilısu among the top 5 dangerous dams. The others include Kayraktepe, Ermenek, Yusufeli and Gullubag and Dini dams.

Culture and Tourism Minister Attila Koc has given assurances that historical remains in Hasankeyf will be removed safely and placed in a new town to be created. However, many experts believe that this is not achievable. For those who are interested, a visit to the new town of Halfeti is recommended which was established when the historical Halfeti along the Euphrates was inundated upon completion of the Bireck HEPP, which also swallowed the historical town of Zeugma.

In June 2006, Turkish Electricity Transmission Company (TEIAS) published a 10-year report on Turkey’s electrical generation capacity, identifying every operating plant, plants to be operational every year up to 2015, those under construction and planned by DSI and the Electricity Market Regulatory Authority (EMRA.) The 80-page report has much valuable information and is an excellent reference document. However, what is most interesting is that the Ilısu HEPP is not even listed as one of the planned projects although it was stated during the ceremonies that it would be operational in 7 years, by 2012. The report is probably based on the decision of DSI back in 2000 to postpone the project indefinitely due to worldwide criticism and the lack of an updated project plan. What is also interesting is that even if all the projects under construction are completed, there will be a shortage of generation by 2009, or, considering a low demand, by 2011. However, if the projects are not completed on time, which is quite possible judging from past performance, and Turkey faces a shortage of natural gas, similar to the experience in early 2006, the electricity shortages may even start earlier. In order to prevent shortages, at least 26,298 MW capacity utilizing different fuel sources based on high demand (13,807 MW based on low demand) needs to be put in operation.

The Turkish government has major plans to develop its hydroelectric power resources and to realize the country’s full hydro potential of 36,260 MW by the year 2023, the 100th anniversary of the Turkish Republic (present installed capacity utilizing around 35% of potential is around 12,631MW.) The majority of the projects have been realized by DSI, others by the private sector. Licences to private companies are granted by the Electricity Market Regulatory Authority (EMRA -EPDK). Large dams and HEPPs which can not be realized by the private sector will continue to be built by DSI, such as the Ilısu dam and HEPP. At the end of 2005, there were 155 hydroelectric power plants in operation, 41 unfinished or under construction (some over 20 years) and plans to develop 502 sites including several under the Southeastern Anatolia Project (GAP) , a total of 678 potential projects.

The Southeastern Anatolian Project (GAP), one of the largest water resources development projects in the world, is a regional development project targeting the improvement of the socio-economic conditions in the nine provinces and the development of hydro resources on the two rivers, Firat and Dicle and their tributaries, much like the Tennessee Valley Authority in the US. Once completed, the total cost of the project which was initiated in 1976 is estimated to be around $32 billion.  To date $18 billion has been spent and 11 of the proposed 19 hydroelectric power plants, have been completed, with a planned total installed capacity of 7,700 MW. Ilısu HEPP will be the fourth project on the Tigris river. GAP will also provide irrigation for 1.82 million hectares of land, corresponding to one-fifth of irrigable land in Turkey which has already begun providing water to the huge Harran valley where even cotton is now being grown.

Many projects are being developed under the bilateral cooperation agreements with 6 counties, totalling 29 dams and hydroelectric power plants. Of these, only Karkamis on Firat and Borcka on Coruh are in operation. Those under construction include the Deriner and Muratli on Coruh and Ermenek on Goksu. These projects are financed through loans which are paid back by the government.

Ebasco Services Inc (now Washington Group International), a major design and construction company from the US was the major contractor on the Keban HEPP which went o line in 1975, which is located on the Firat but is not a part of the GAP, and Gokcekaya HEPP on Sakarya river. During the early stages of a search for suitable hydro sites, Ebasco started looking at the Boyabat HEPP on Kizilirmak in the early seventies. Over the years, work was carried out on at the Boyabat site by DSI, starting with access roads and the transmission site high on a hill. During the late 90s, the project was picked up by Dogus Enerji to develop it as a BOT project, which was cancelled and is now listed as one of the investments sites by DSI. However, after over 30 years since the original studies, there is no firm date for the re-start of construction and completion. And yet, the government is planning a nuclear power plant near Sinop not too far from Boyabat.

There are many hydroelectric power plants around Turkey which were started many years ago but not completed and now being allowed to be taken over by the private sector. In addition, there are several projects which are awaiting state funds for their completion by DSI, such as the Cine HEPP where construction was started back in the late 80s (3)

For years, the government has been trying to privatize the sector. So far the only privatized hydroelectric power plant is the Hazar I and II, located on one of the tributaries of Firat. Last year, the Oymapinar HEPP was also privatized when it was transferred to Cengiz Insaat as part of the privatization of the Seydisehir Aluminum Works. There is much discussion on the privatization of existing plants operated by DSI, but no action has been taken yet. The 7 plants that were part of the Cukurova Elektrik, Oymapinar was one of them, were transferred to EUAS through a controversial operation which is still being sorted out.

The first large hydroelectric power project, built under the Build-Operate-Transfer (BOT) model, was the Birecik HEPP on the Firat, which is now operating. Early this year, the 100 MW Yamula HEPP was put into service after several years of development and construction, which is owned and operated by Ayen Energy. There are around also hydroelectric power plants operating under the BOT model.

Energy Policies of the European Union and the Turkish Government

Turkey is striving to become a member of the European Union which has set the following objectives in its energy policy: Improvement of competitiveness, the security of energy supplies and protection of the environment. Although there has been much criticism of the Energy Policy of Turkey, the present government has been studying the European standards and at the same time, advocating the use of indigenous fuels in the generation of electrical power including renewable energy sources.

2.DSI 1954- 2005, A publication of the General Directorate of State Hydraulic Works

4.   Euphrates Civilizations: From Ataturk dam to Birecik Dam, by GAP – This publication reveals the richness of the Firat (Euphrates) River basin which is full of historical treasures waiting to be discovered. The ancient cities of Zeugma and Samosata are now covered by the waters of Birecik and Ataturk dams. The city of Samosata goes back to BC which was named after the Commanege King Samos who lived around 130 BC.

The Efforts over NGO’s and Media for the Acceptance of PKK...

An exhibition for Mustafa Kemal Ataturk – The 130th Anniversary of...